The woman has a fractured skull after the police blew her in the head with a water cannon and threw her against a wall during the Dutch lockdown riots – although “she did not protest”.

By Tim Stickings and Ryan Fahey for Mailonline

One woman was stabbed 15 times after being blown in the head with a water cannon and crashing into a concrete wall during Dutch anti-lockdown protests.

Footage taken on a street in Eindhoven showed the moment Denisa Stastna took in the full force of a jet of water fired from a police car on Sunday.

The Czech citizen had a broken skull, more than 15 stitches in the head and an injured lip after the jet of water hurled her against the side of a building.

She and her boyfriend claim they were merely filming and not participating in the protests – but authorities say they should have left the area under an emergency order to disperse the crowd.

Denisa’s friend Michael Piksel insisted, according to the radio station Omroep Brabant, that the two “were never violent”.

“It hurts that we are being dismissed as troublemakers, hooligans or Pegida supporters,” he said, referring to the anti-Islam group involved in the protests.

Denisa herself said: “We just stood there and filmed and went away. They had no right to use the water cannon on us. ‘

When asked what they were protesting about, she said, “Against nothing”.

The couple are now planning to take action against the police after footage of their injury was broadcast in Dutch media. 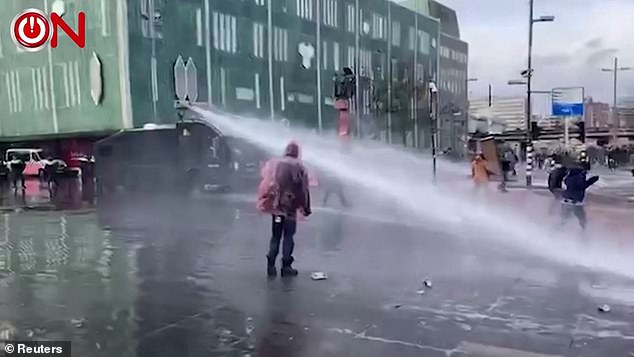 Stastna claims she and her boyfriend were filming protests in Eindhoven when she was blown up by the water cannon. The impact broke her skull and took 15 stitches

However, a spokesman for the Dutch prosecutor said there were “several announcements” urging people to leave under emergency rules during the protests.

Hundreds of people have now been arrested after rioters – with stones, fireworks and Molotov cocktails – besieged Dutch cities for four days to protest a tough lockdown that began in mid-December.

The riots that began with the burning down of a coronavirus testing center in a fishing village on Saturday night were the worst in the Netherlands in years.

Although the unrest was originally sparked by the restrictive lockdown, calls for social media unrest spread among young people increased disobedience.

Schools in the country have been closed since the Christmas holidays.

The violence expanded the police and at times led to the deployment of the military police.

Anger over wages for FTSE bosses as BetFair boss gains 17%

Coronavirus Sweden: “Wishful thinking” left the country open as gatherings were limited to 8