Parents shed tears of joy when hundreds of Nigerian students kidnapped by Boko Haram were rescued by their Islamist kidnappers.

The boys were freed after being kidnapped in an attack on their school. On Friday they were greeted by the Governor of Katsina State and the Nigerian President.

Emotional reunions with their parents started late in the day.

“I haven’t been able to sleep since that incident, but now I can sleep,” said Salisu Kankara, a parent of one of the released students. 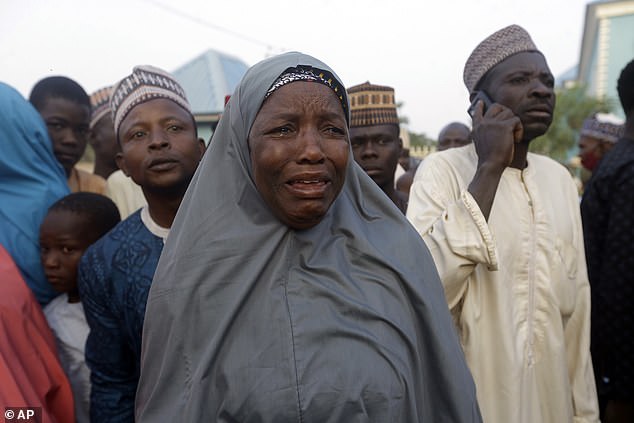 A family member of a freed student cries as she waits to see her son again in Katsina, Nigeria, on Friday, December 18. The students’ nightmare began on the night of December 11th when they were seized by men with AK-47 rifles from the All-Boys Government Science Secondary School in the village of Kankara, Katsina state, northwest Nigeria 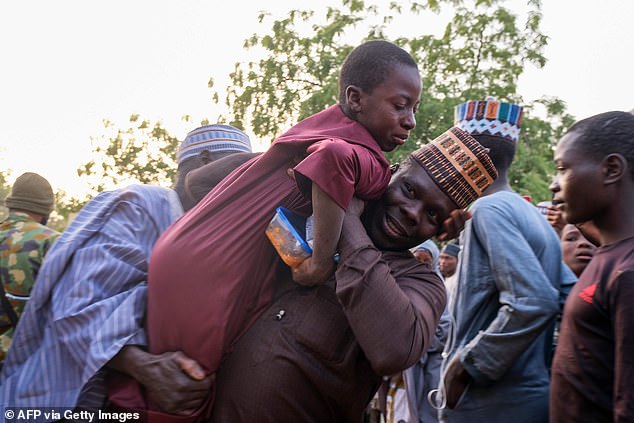 They were marched through a forest and forced to lie in the mud in the middle of firefights between their captors and the troops pursuing them. Pictured: A man reacts when he reunites with his son, who was among the abductees

The relatively quick release of the more than 330 boys came after a swift reaction by the government, which apparently had learned from previous kidnappings of mass schools, particularly the Chibok schoolgirls, which had not had such a happy outcome.

Nigerian jihadist rebels, Boko Haram, took responsibility for the kidnapping, saying they attacked the school because they believe Western education is un-Islamic.

With the boy’s parents eagerly awaiting news, many in Nigeria and around the world prepared for a long, drawn-out hostage situation. Many feared the boys would be forced to become child soldiers for Boko Haram.

Clad in dusty clothes and exhausted from their ordeal but otherwise fine, the boys arrived in buses in Katsina city on Friday after authorities announced that 344 children had been turned over to security guards.

The boys piled on chairs in a conference room, many of them barefoot and some wrapped in gray blankets, as they prepare for medical exams before being reunited with their families. 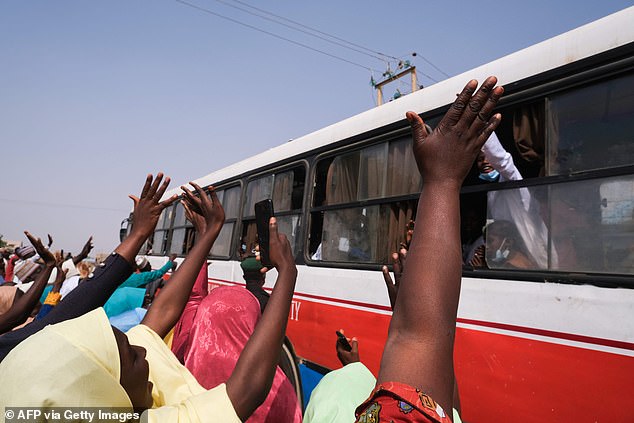 Pictured: Parents are excited about the release of the kidnapped Kankara students in Katsina, northwest Kastina, Nigeria as they come home on a bus after being rescued 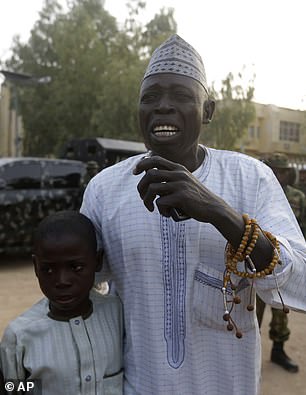 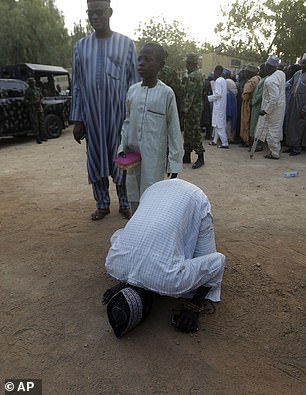 A freed student’s father cries and prays when he is reunited with his son. Nigerian jihadist rebels, Boko Haram, took responsibility for the kidnapping, saying they attacked the school because they believe Western education is un-Islamic 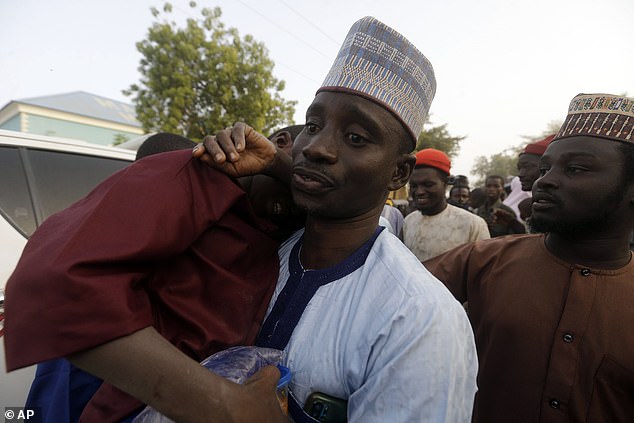 With the boy’s parents eagerly awaiting news, many in Nigeria and around the world prepared for a long, drawn-out hostage situation. Many feared the boys would be forced to become child soldiers for Boko Haram

One of them, with dried mud stains on his face, told local television that the kidnappers had fed them bread and cassava. “It was cold,” he said. When asked how he felt when the bus arrived in Katsina, he said, “I was really happy” and smiled.

The students’ nightmare began on the night of December 11th when they were confiscated from men armed with AK-47 rifles from the State Science Secondary School for Boys in the village of Kankara, Katsina state, northwest Nigeria.

They were marched through a forest and forced to lie in the mud in the middle of firefights between their captors and the troops pursuing them.

The boys described walking through the bush and various forests, stopping during the day and walking without shoes at night, stepping over thorns and stones.

Nigerian jihadist rebels, Boko Haram, took responsibility for the kidnapping, saying they attacked the school because they believe Western education is un-Islamic.

Regional premier Aminu Bello Masari said no ransom was paid to set her free, adding, “I think we can say … we recovered most, if not all, of the boys.” 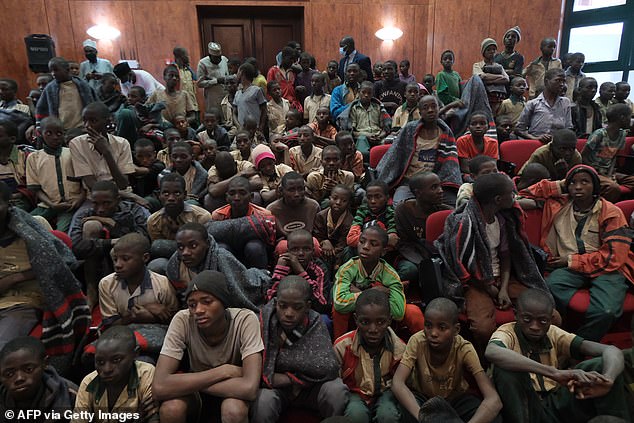 Rescued: Exhausted students piled on chairs in a government building in Katsina today after being released from captivity a week after being abducted by Boko Haram 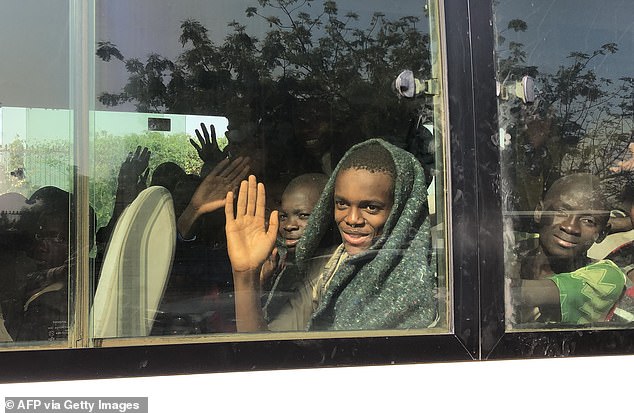 Welcome back: A smiling boy waves on board a bus as children return to Katsina a week after their abduction, for which the Islamist group took responsibility on Tuesday 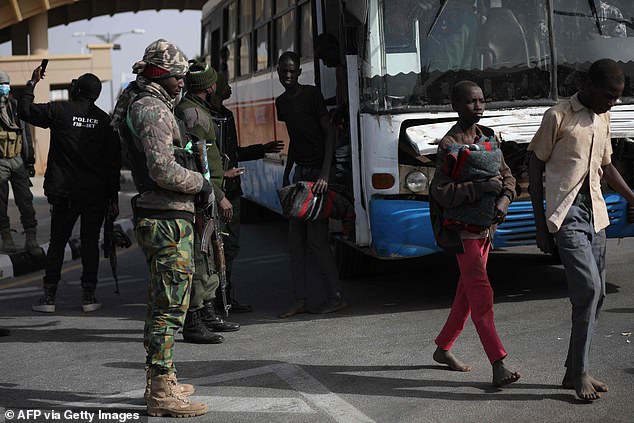 Security: Armed guards watched as students from the Kankara State Science School were returned to Nigerian authorities on Friday 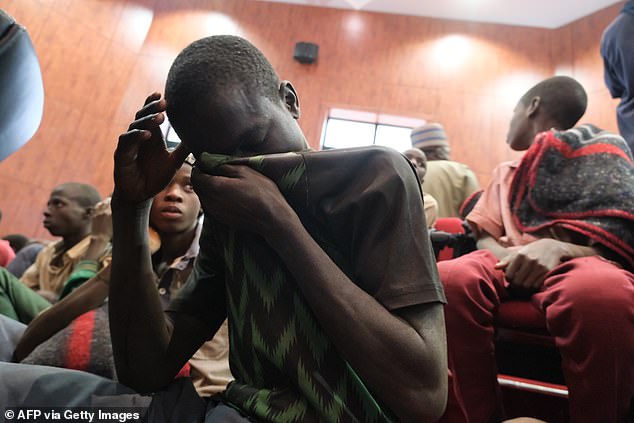 The kidnapping commemorated the kidnapping of more than 270 school girls in Chibok in 2014, only about half of whom were found or rescued.

Hours before the boys’ rescue was announced, an alleged video by Boko Haram showing militants with some of the boys appeared.

In the clips, a distraught teenager, surrounded by dozens of younger boys, speaks English and Hausa and says, “We were caught by the Abu Shekau gang.”

His voice wavers as he says, “Please, please, we need your help,” while the other children shout into the camera before the recording ends.

The video was released with a recording of the group’s elusive leader Abubakar Shekau.

The attack was originally blamed on criminal gangs who have terrorized the region for years, but Boko Haram took charge on Tuesday. 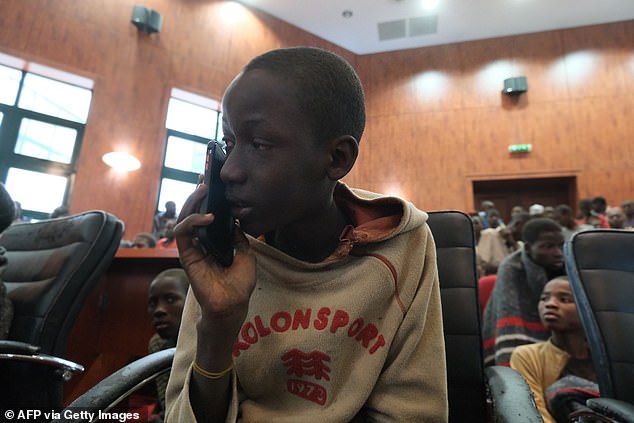 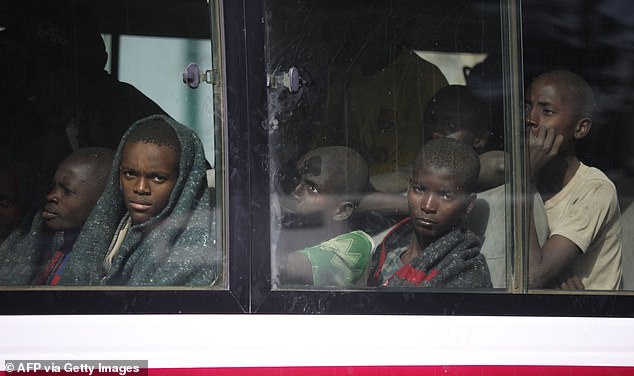 The children returned today in buses, some of them wrapped in gray blankets and exhausted after their week-long ordeal 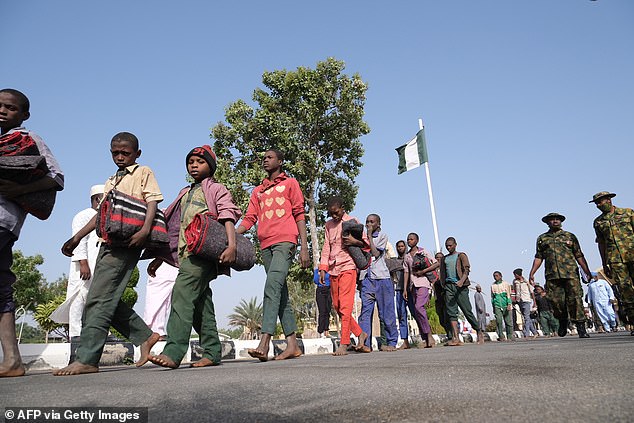 More than 800 students were present at the time of the attack, of whom more than 330 were taken while others fled.

The governor announced their release late Thursday and said 344 students had been rescued by security forces.

However, it remained unclear whether all of the abducted students had been released, given the continuing uncertainty about the number of students admitted.

Since the kidnapping, parents have gathered at the school every day, desperate for information about the fate of the children.

“I was about to leave last night when an escaped boy was brought here,” one mother told Murja Goma before the children were rescued. 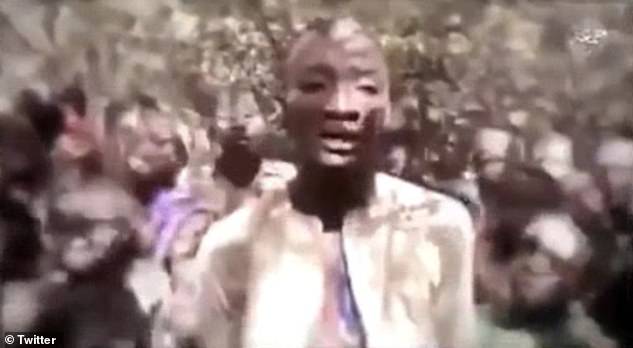 A distraught teenager in a video posted by Boko Haram on Thursday. Surrounded by dozens of younger boys, speaking English and Hausa, he says, “We were caught by the Abu Shekau gang,” referring to the elusive leader of the group 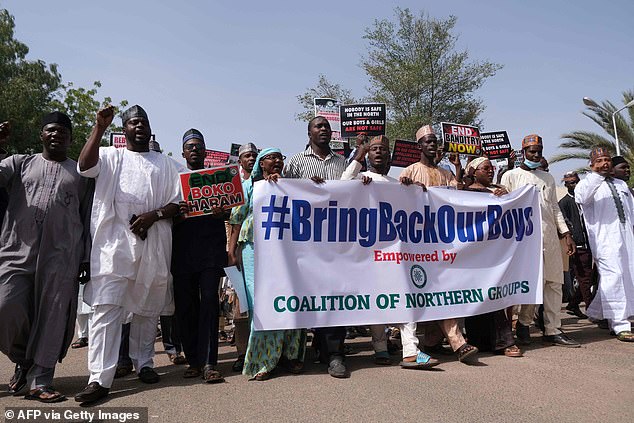 “He said they had nothing to eat, they live on leaves and acacia fruits, which their kidnappers pick from the trees for them,” said the mother.

“We have shed so many tears, our hearts mourn and we don’t even know what to do,” said the woman.

The authorities will “work with the police and also hire private security firms to protect schools” and prevent the “ugly experiences of the past six days,” the regional governor said.

Nigerian President Muhammadu Buhari welcomed the release of the boys and called them “a great relief to their families, the whole country and the international community”.

Buhari said his government is “very aware of its responsibility to protect the lives and property of Nigerians.”

“We have a lot to do, especially now that we have reopened the borders,” Buhari said, noting that the northwest region “is a problem” that the administration is “firmly addressing”. 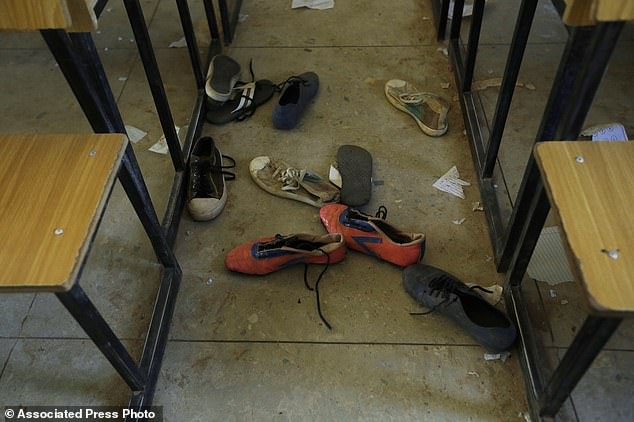 Shoes of kidnapped students from Government Science Secondary School can be seen in their classroom in Kankara, Nigeria 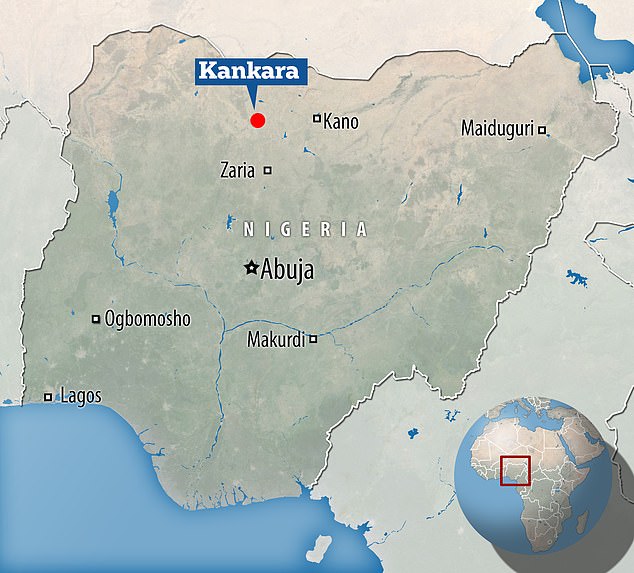 Boko Haram and a splinter group of the Islamic State in the Province of West Africa (ISWAP) are leading an uprising in northeastern Nigeria and are said to have only a small presence in the northwest. However, Tuesday’s accountability claim marks a major turning point – suggesting that the Islamists have made great strides in the northwest

After learning from previous mistakes, the government quickly deployed forces this time after the boys were abducted and the kidnappers quickly surrounded themselves, Bukarti said.

Her release is “a fantastic story at the end of a terrible week,” he said. “Parents will be reunited with loved ones … all of Nigeria will breathe a sigh of relief to reach a happy ending.”

UNICEF Nigeria representative Peter Hawkins called on the attackers to release any other children who may be affected by this or any other attack.

“Schools should be safe. Children should never be attacked, and yet far too often in Nigeria they are just that – victims of attacks on their schools, ”he said.

He urged the Nigerian government to take better measures “to ensure that schools are safe and that all Nigerian children can study without fear”.

President Muhamadu Buhari welcomed the release of the boys and met with everyone on Friday to encourage them to continue their education despite the attack and kidnapping they had suffered. 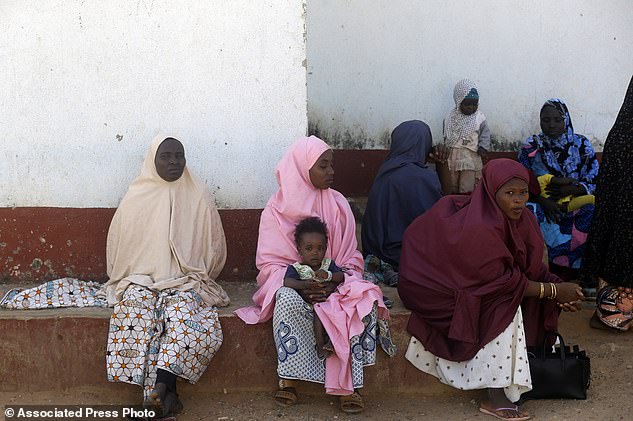 The parents of missing Government Science secondary school students await news of their children on Wednesday in Kankara, Nigeria