By Tim Stickings for Mailonline

North Korea held a public execution by firing a squad to punish a breach of coronavirus rules, insiders in the country say.

According to Radio Free Asia, a man accused of smuggling across the sealed Chinese border to get people to obey the rules was shot dead on November 28th.

While North Korea officially claims there has never been a case of Covid-19, Kim Jong-un’s regime has launched “emergency quarantine measures of the highest order” and troops have been ordered to shoot intruders at the Chinese border.

“They carried out a public execution by firing a squad to threaten residents here in the border area because there was a lot of contact with people on the other side of the border, including a lot of smuggling,” a source said.

The North Korean regime, led by Kim Jong-un (pictured), carried out a public execution to punish a violation of coronavirus rules, insiders in secret country say

The death row inmate was described as a man in his fifties accused of smuggling Chinese business associates across a border that was closed for most of 2020.

China is North Korea’s largest trading partner and benefactor, but trade between the two has plummeted 75 percent due to the pandemic.

Fearing smugglers bringing in the virus, Kim’s regime has stepped up its military presence on the border to enforce restrictions.

Pyongyang has also deployed special forces to check the border guards and make sure they are not involved in the smuggling themselves.

Another source said the public execution was typical of the regime’s efforts to bring people into submission.

“When people complain that their livelihoods are compromised, the authorities always try to silence them by threatening them with public executions or sending them to political prison camps,” they said.

North Korea has claimed it has not found a single coronavirus case on its soil while doing everything it can to prevent the virus from spreading.

A major outbreak could have dire consequences as the north’s health system is chronically inadequate. 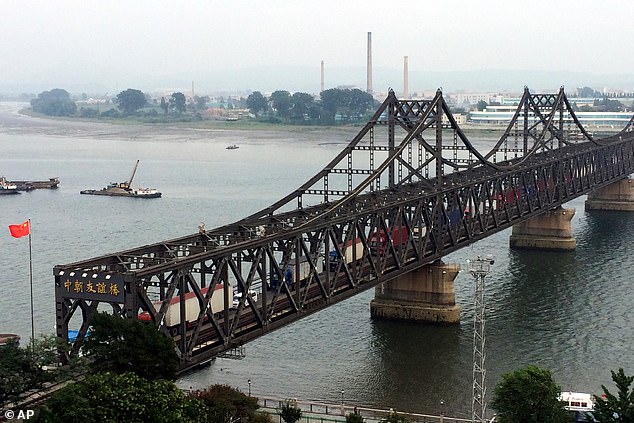 The convict was accused of smuggling across the sealed border between China and North Korea (pictured is a bridge that connects the two countries).

South Korean spy agency NIS announced last week that Kim had ordered a lockdown in Pyongyang and banned fishing at sea to keep the virus away.

Intelligence officials said Kim was showing “excessive anger” and taking “irrational measures” against the pandemic, according to a briefing lawmaker.

The spy agency also believes Pyongyang executed a key officer in August for violating the rules on goods brought in from abroad, lawmakers said.

North Korea also made an unsuccessful hacking attempt against at least one South Korean pharmaceutical company that was working on a vaccine, according to the NIS.

The agency has had mixed records in confirming developments in North Korea, one of the most secretive countries in the world.

The pandemic has dealt a severe blow to the North Korean economy, already under US sanctions, but the regime remained silent about Joe Biden’s US election victory last month.

Experts have debated whether North Korea will soon be doing major missile tests again to get Biden’s attention.

The South expects Kim to hold a military parade ahead of a ruling party congress in January to show violence just before Biden’s inauguration.

These vacation returns are linked to a massive environmental footprint