Alexei Navalny says “Putin the poisoner” wants to lock him up “to scare millions”.

Russian opposition leader Alexei Navalny said today that Vladimir Putin wants to lock him up to “scare millions” and warned the president that “people will realize that you can’t lock everyone up”.

The 44-year-old mocked Putin by nicknamed him “Vladimir the underwear poisoner” and told a judge that his trial is only because the Russian leader failed to kill him with Novichok.

He also told the Russian courthouse that Putin is“calling for the underwear to be stolen from opponents and smeared with chemical weapons”.

His imprisonment has sparked weekends with tens of thousands of demonstrators demonstrating across Russia.

Today 311 Navalny supporters were dragged away by riot police when he faced a representative of the Federal Prison Service (FSIN) in the Moscow courthouse.

“It’s easy to lock me up,” Navalny said in his closing statement during his trial, the Moscow Times reports. “The main thing in this process is to intimidate large numbers of people. Thats how it works. They put one person behind bars to scare millions.

He continued, “I really hope this process will be seen as a sign of weakness.”

Navalny warned Putin of his actions, adding, “You cannot put millions and hundreds of thousands in jail – and I hope people will start to realize that. Once they do – and that moment will come – you won’t be able to put everyone in jail. ‘

Navalny said the “elephant in the room” is that his trial is only taking place because he “insulted” Putin for surviving the Novichok poisoning. 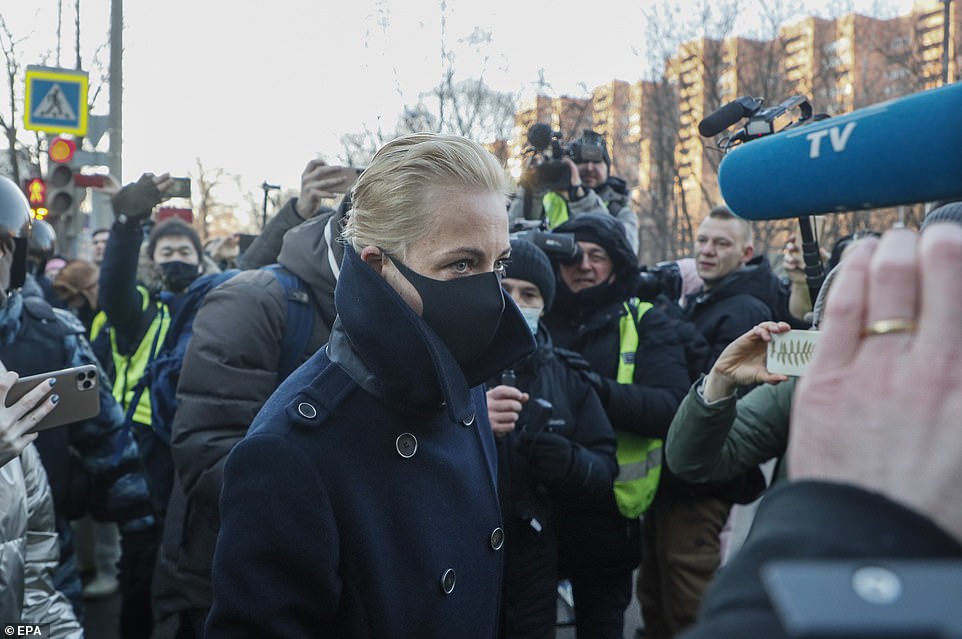 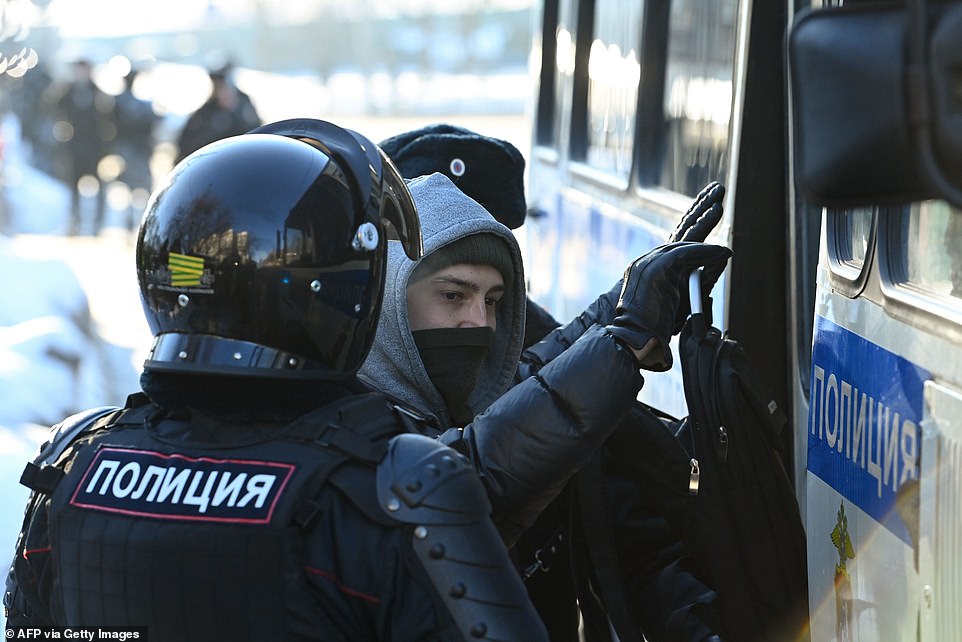 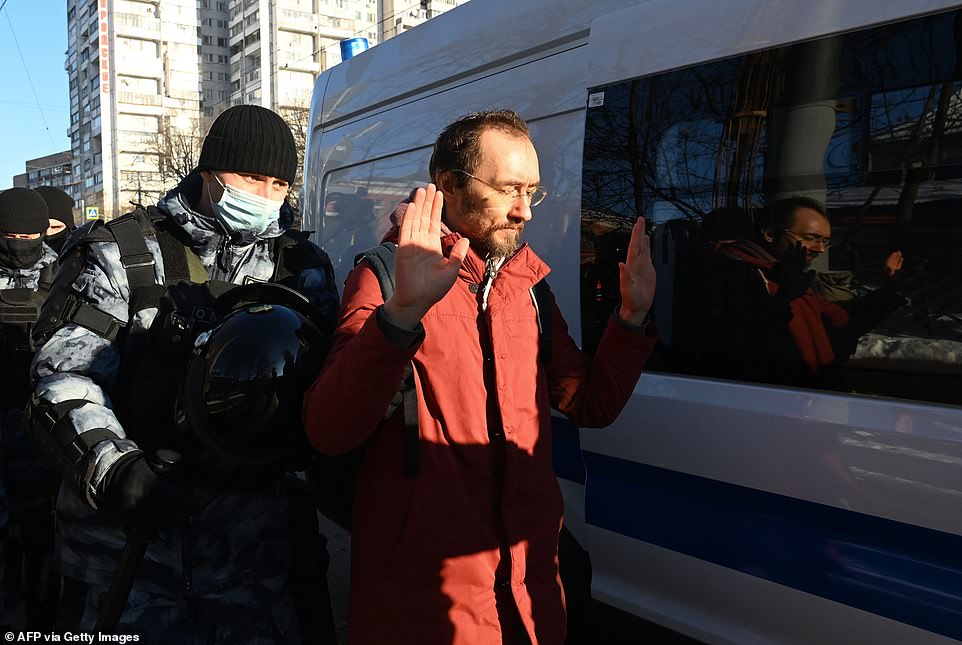 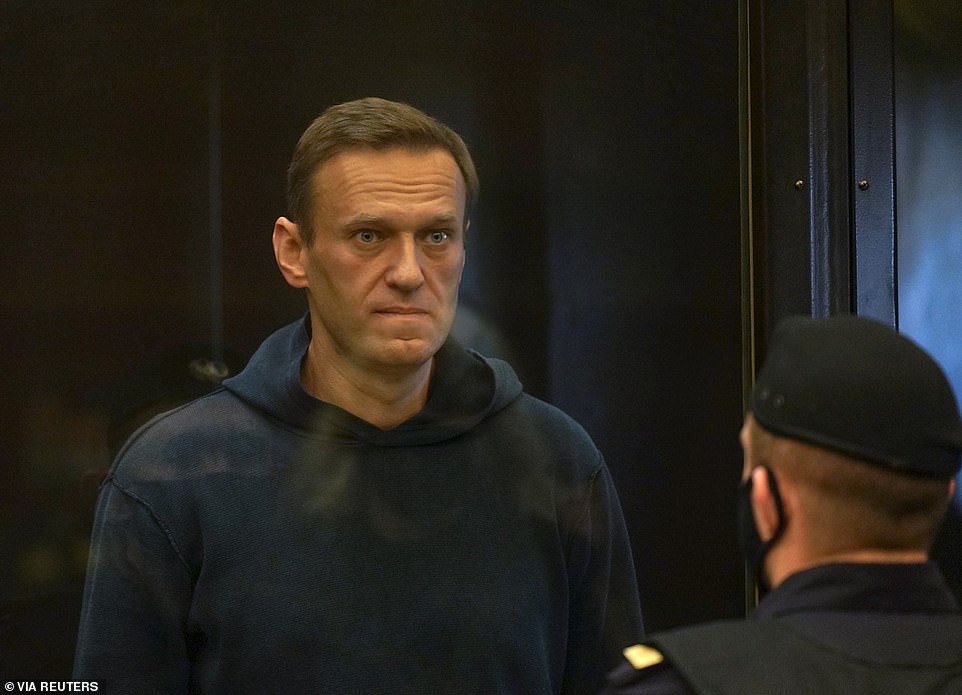 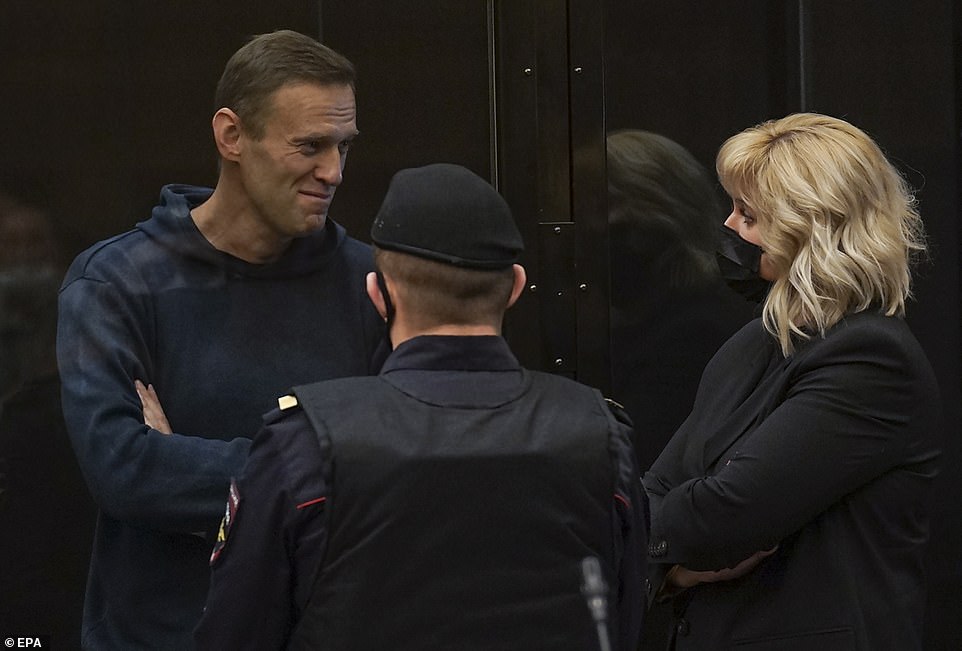 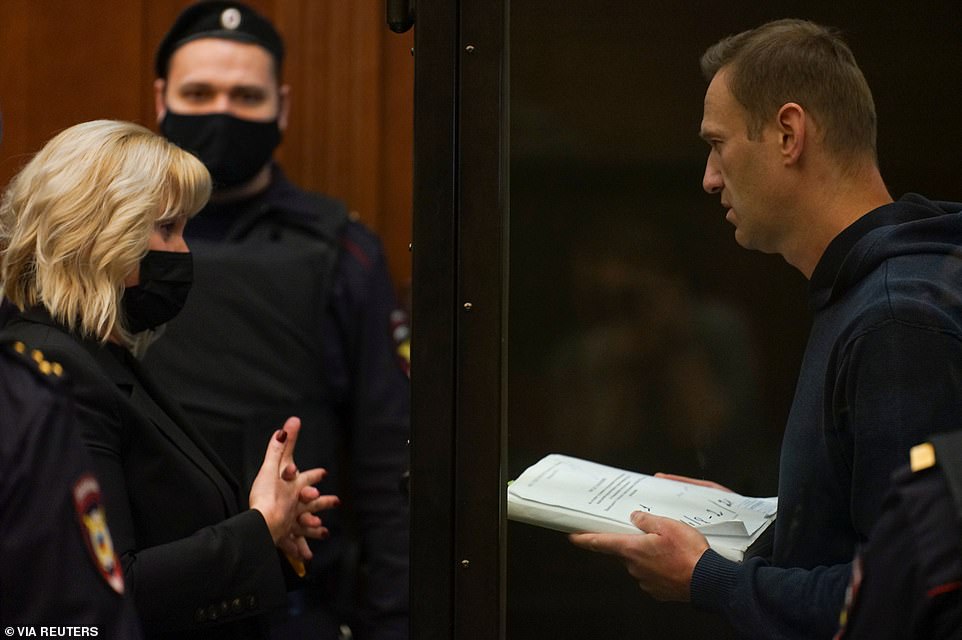 Navalny speaks to his lawyer before the hearing

“We know why this is happening,” he said. The reason is the hatred and fear of a man in a bunker. Because I insulted himby surviving after trying to kill me on his orders.

‘No matter how much [Putin] tries to pose as a geopolitician, his biggest grudge against me is that he will go down in history as a poisoner. ‘

Navalny mocked the Russian president and continued, “There was Alexander the Liberator and Yaroslav the Wise. Now we have Vladimir, the underpants poisoner.

“The police are guarding me and half of Moscow is cordoned off because we have shown that he demands that the opponents steal underwear and smear them with chemical weapons.”

Navalny faces three and a half years in prison if the judge, who is now considering his verdict, decides to trigger the suspended sentence imposed in 2014 following his money laundering trial.

Navalny dismisses the conviction as politically motivated, believing the suspended sentence was resuscitated to strangle him.

His defense lawyer Vadim Kobsev compared Navalny’s poisoning to a “political Chernobyl” and ended his speech with a quote from the TV series “Chernobyl”.

He said, ‘Legasov says, “Dyatlov broke all the rules and made the reactor self-destruct. Nobody in this control room knew the shutdown button would act as a detonator.” Dear judge, don’t be like Dyatlov, don’t push the button. ‘

Navalny shot down allegations that he had violated his parole terms, arguing that he was in a coma at the time.

His defense team argues that he recovered from Novichok poisoning in a hospital in Berlin for the period in question. The opposition leader says he was poisoned by the Kremlin.

The FSIN official alleged that he had failed to produce any documents to provide “serious reasons for not showing up” at personal parole appointments.

“I was in a coma!” Navalny answered. Comrade Captain, do you respect Russian President Vladimir Vladimirovich Putin? … You said you don’t know where I have been since August. Putin said on television that thanks to him I was sent to Germany for treatment. ‘

“I was in a coma, then I was in intensive care,” he continued. “I sent you medical documents. They had my address and contacts. What else could I have done to tell you where I am? I have a lawyer and my lawyer has a phone. How could I have informed you better? ‘

His defense argues that for much of the time the prison service claims he was injured, he was in a coma in the Berlin hospital and told the judge today that “the whole world knew where he was”.

The case represents one of the greatest challenges the Kremlin has faced in years and has led to calls for new Western sanctions against Putin’s government.

The Kremlin said today it is not following the trial, hoping the “nonsense” will not lead the European Union to draw any “stupid” conclusions.

According to local media, diplomats from the US, UK, Bulgaria, Poland, Latvia, Lithuania and other European countries attended.

Russian Foreign Ministry spokeswoman Maria Zakharova said it was “not just meddling in the internal affairs of a sovereign state, but an accusation of unsightly and illegal attempts by the West to contain Russia.”

Navalny was standing in the glass-clad dock in a black hoodie when he spoke to his lawyer Olga Mikhailova.

When the judge asked him to provide his place of residence, Navalny joked that he was living in Matrosskaya Tishina prison.

He also requested that journalists be allowed to enter the courtroom. Reporters were only allowed to view a live video feed from a separate room.

According to Navalny’s defense, while recovering from novichok poisoning, he was unable to personally register with the Russian authorities, as the terms of his parole dictate.

But prison officials told the court that he had failed to report to them while he was doing business in Germany.

A representative of the Federal Prison Service (FSIN) said: “Since the end of September 2020 Navalny has been in outpatient treatment. Judging by media reports, he moved around freely and gave interviews.

“He did not contact the FSIN inspectors even though their phone number was posted on their website. He was put on the wanted list when the service decided he would systematically evade suspended sentences. ‘

Navalny replied: “Comrade Captain, do you respect the Russian President Vladimir Vladimirovich Putin? … You said you don’t know where I have been since August. Putin said on television that thanks to him I was sent to Germany for treatment. ‘

“I was in a coma, then I was in the intensive care unit,” he continued. “I sent you medical documents. They had my address and contacts. What else could I have done to tell you where I am? I have a lawyer and my lawyer has a phone. How could I have informed you better? ‘

Navalny’s lawyer Vadim Kobzev added: “The whole country, the whole world knew where he was.” 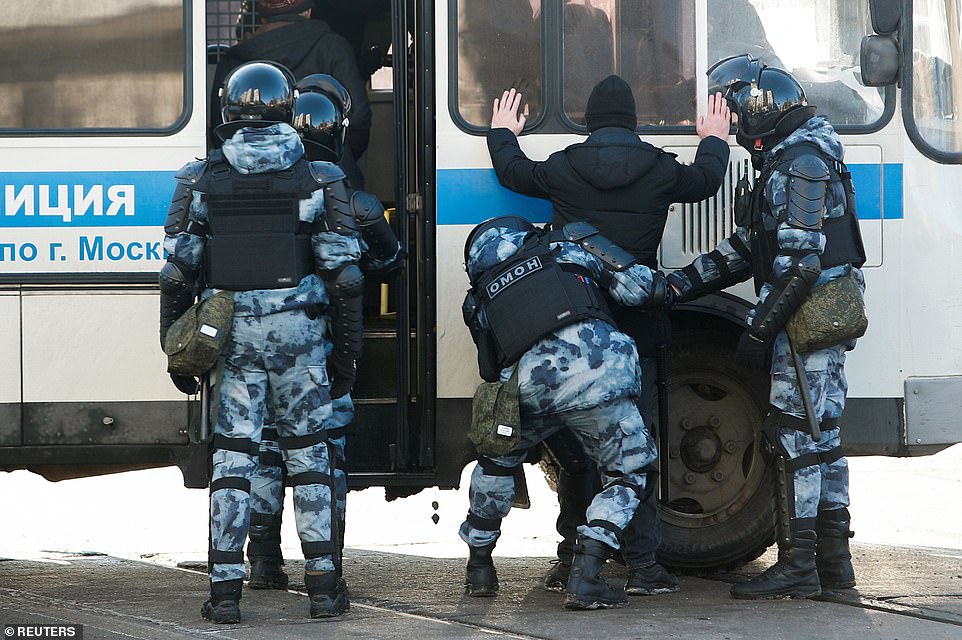 Police officers arrested Navalny supporters near the courthouse this morning 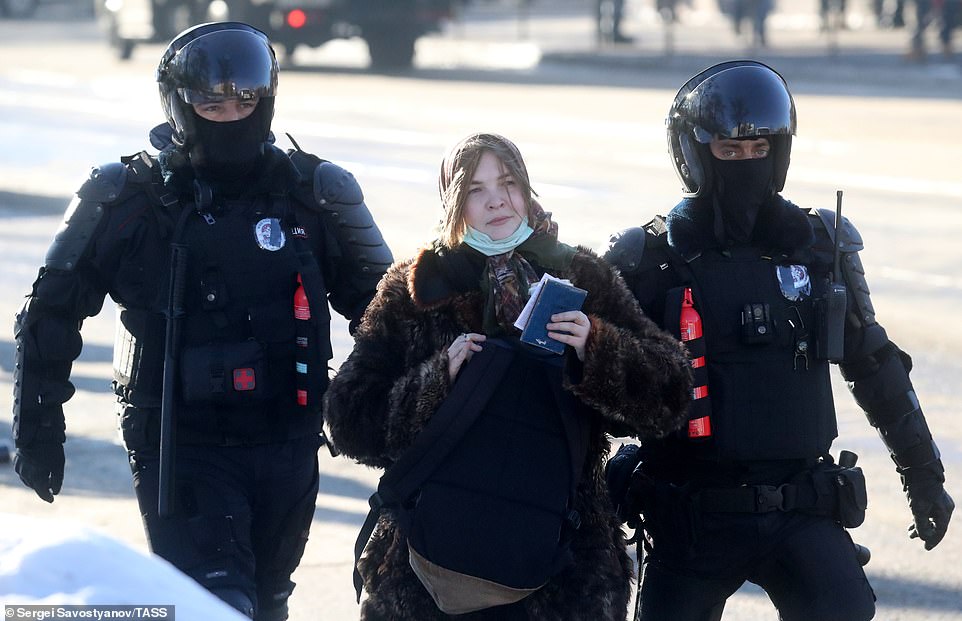 A woman is being led away by riot police this morning 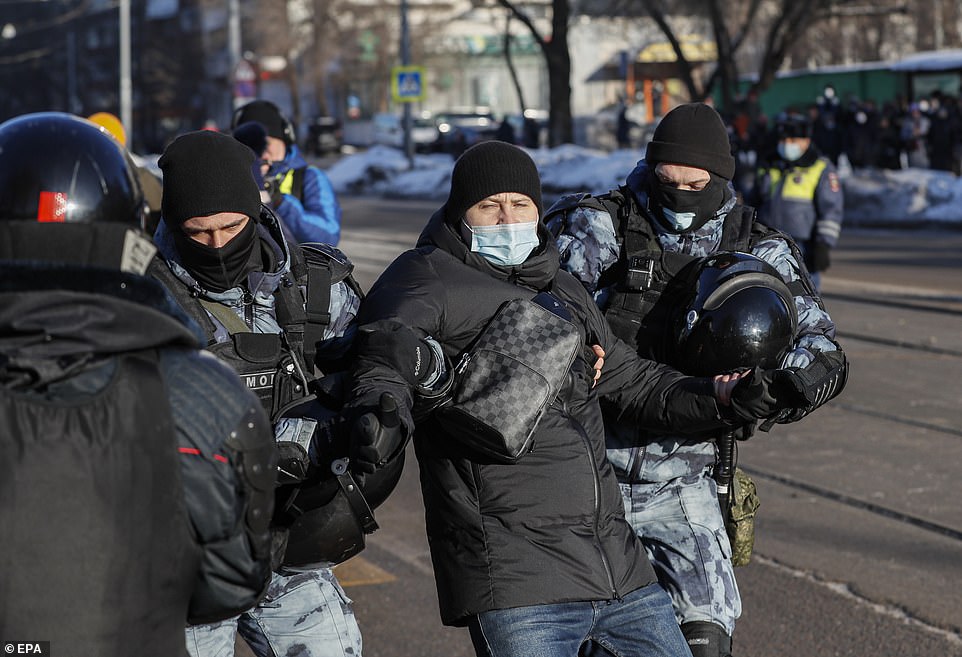 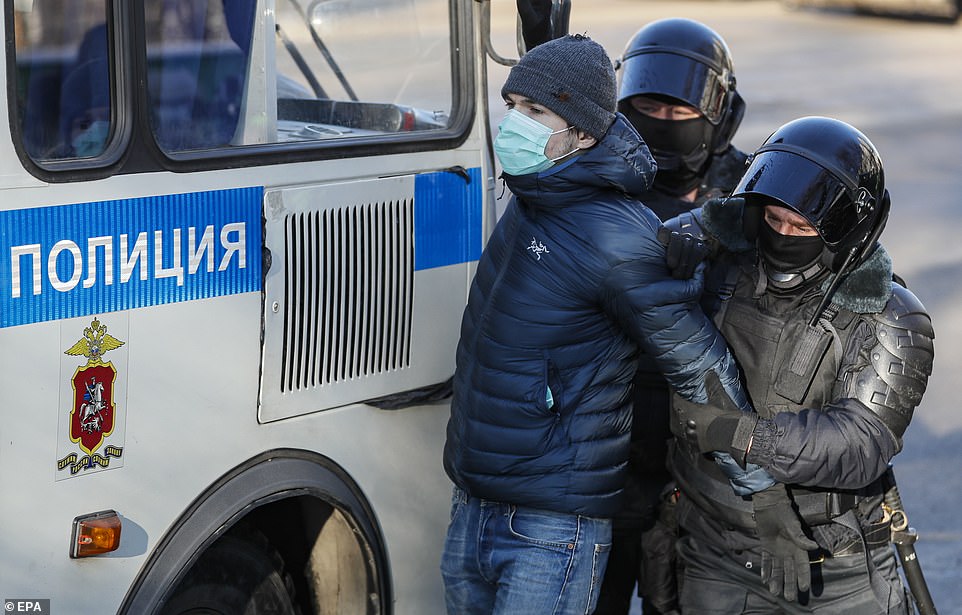 The riot police push a protester towards their van 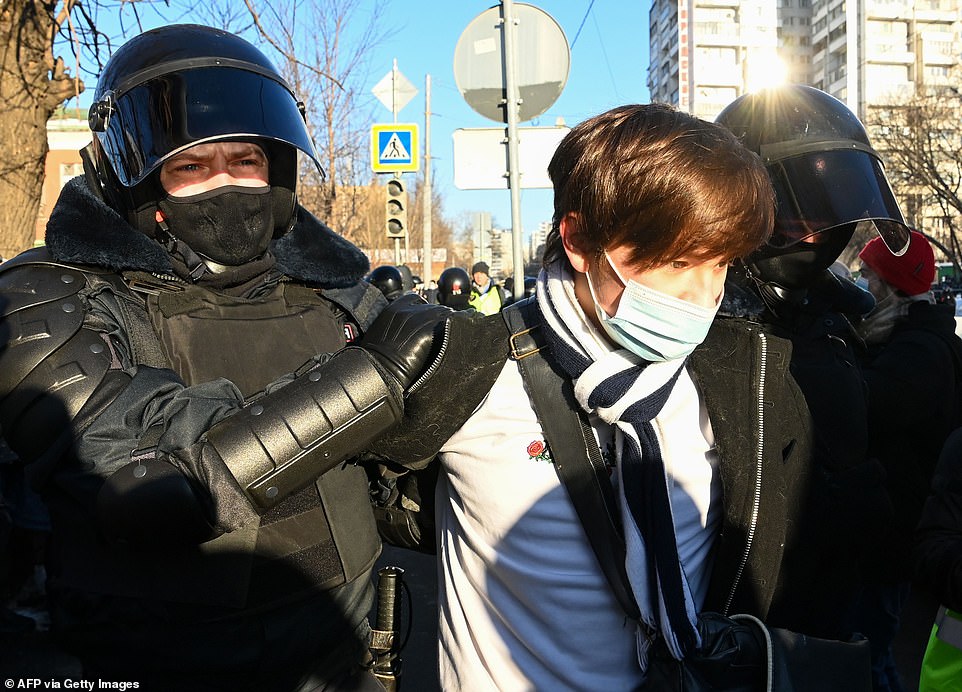 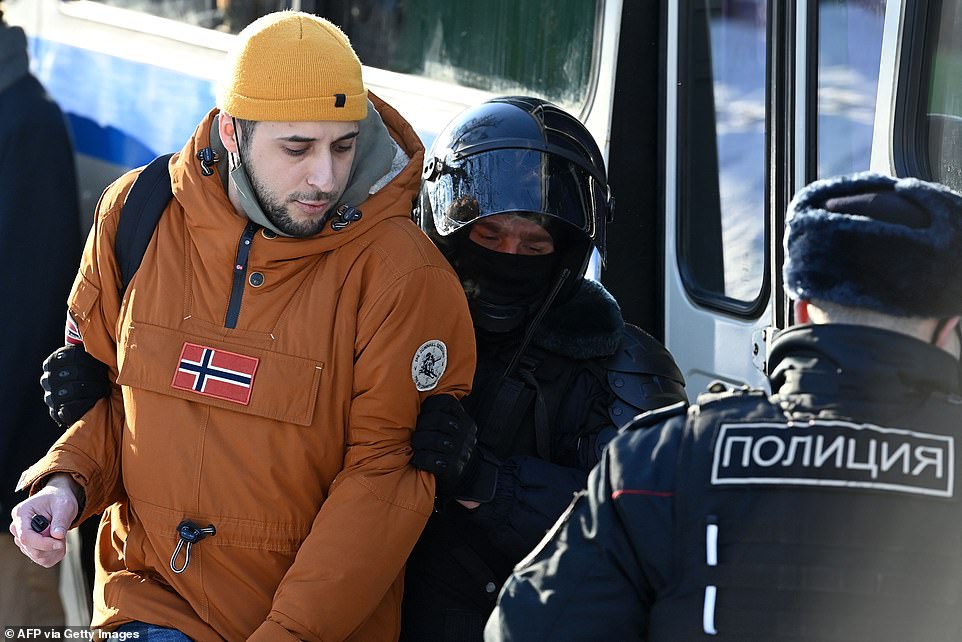 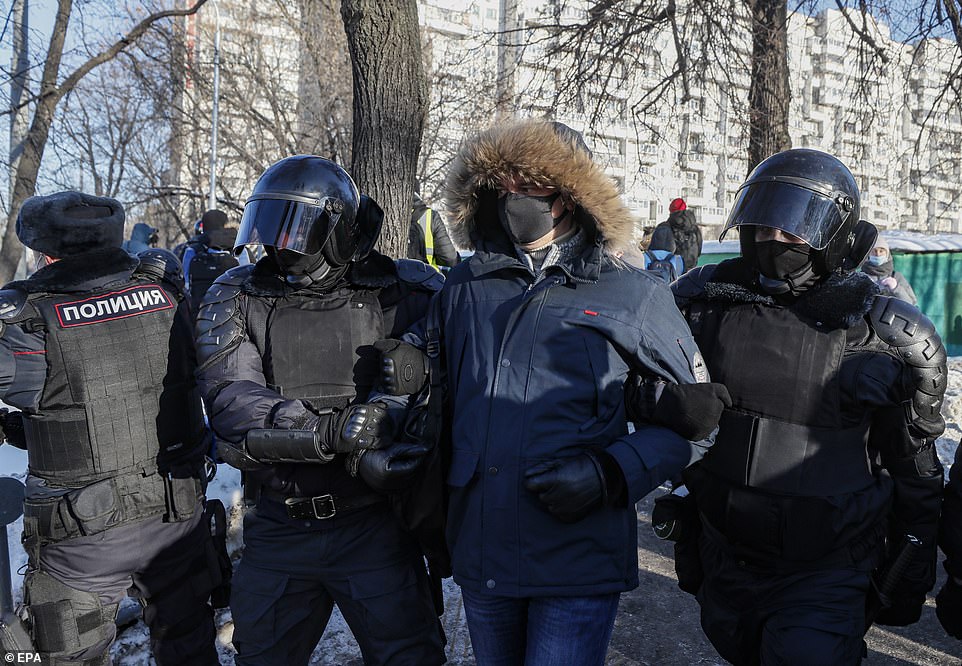 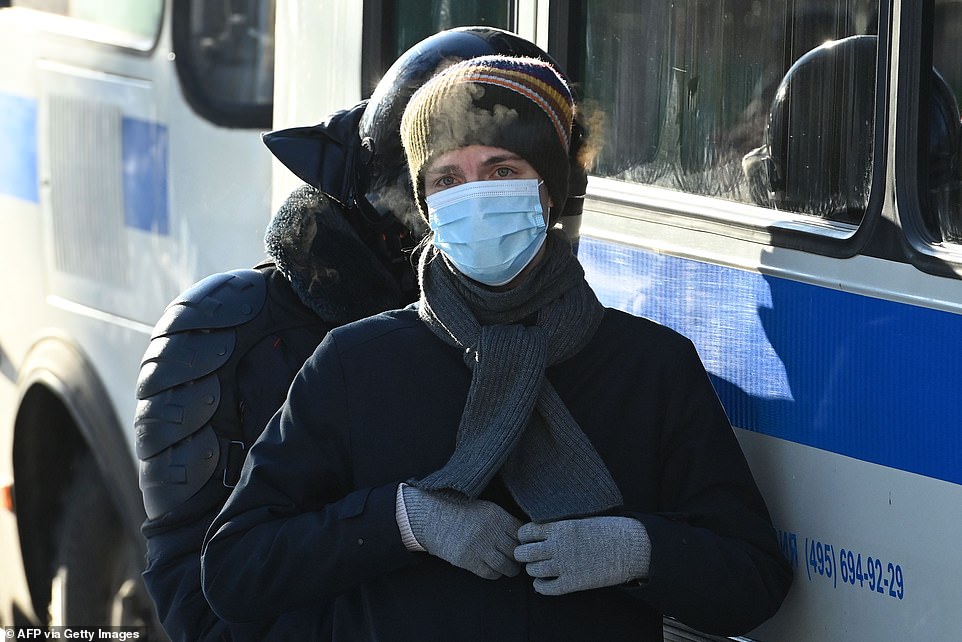 A woman is arrested in court this morning 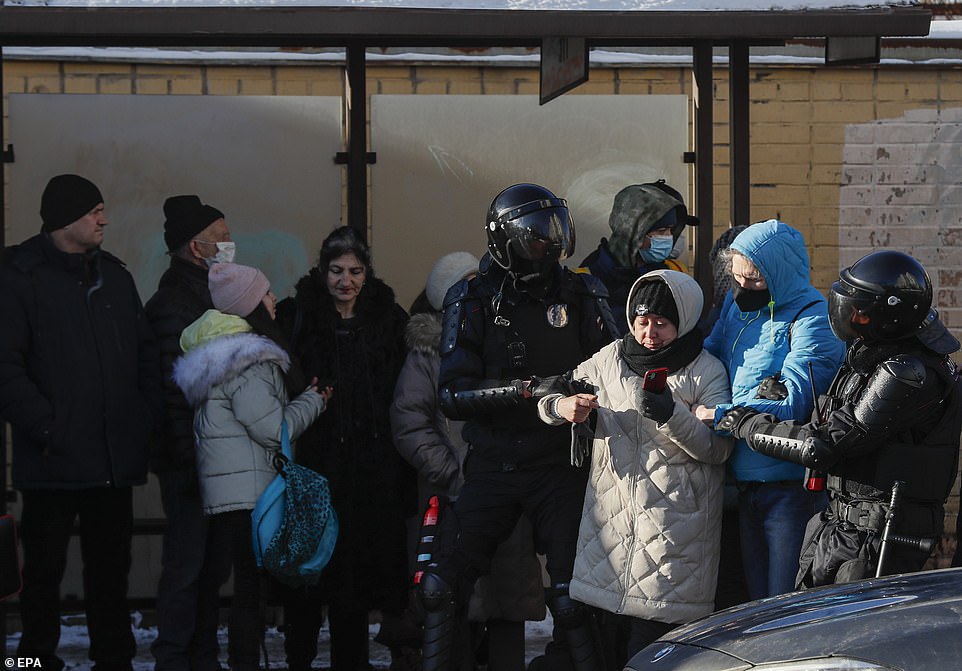 Russian police were holding a woman near the courtroom on Tuesday 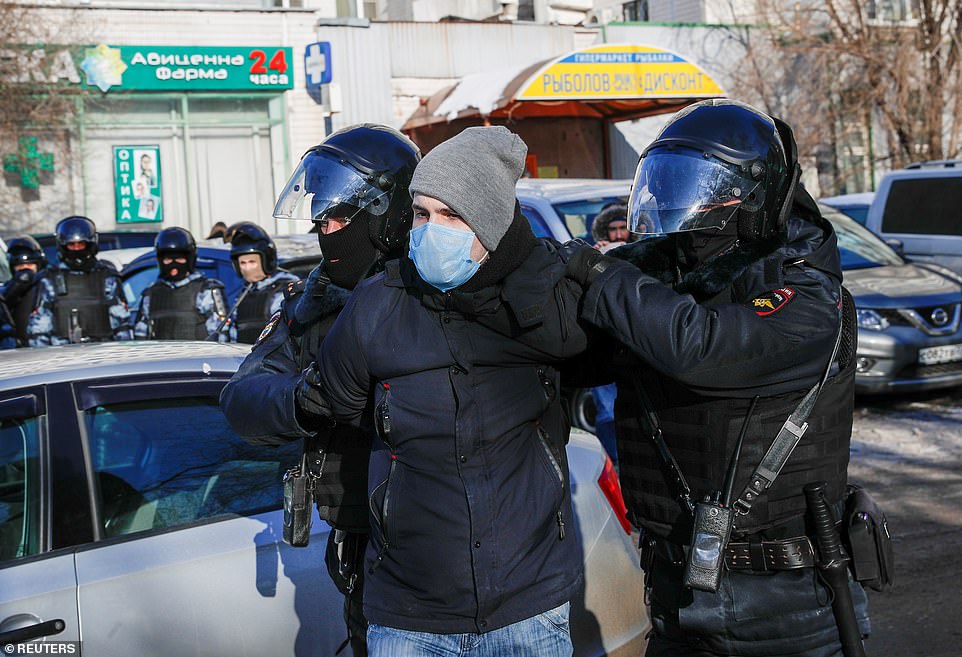 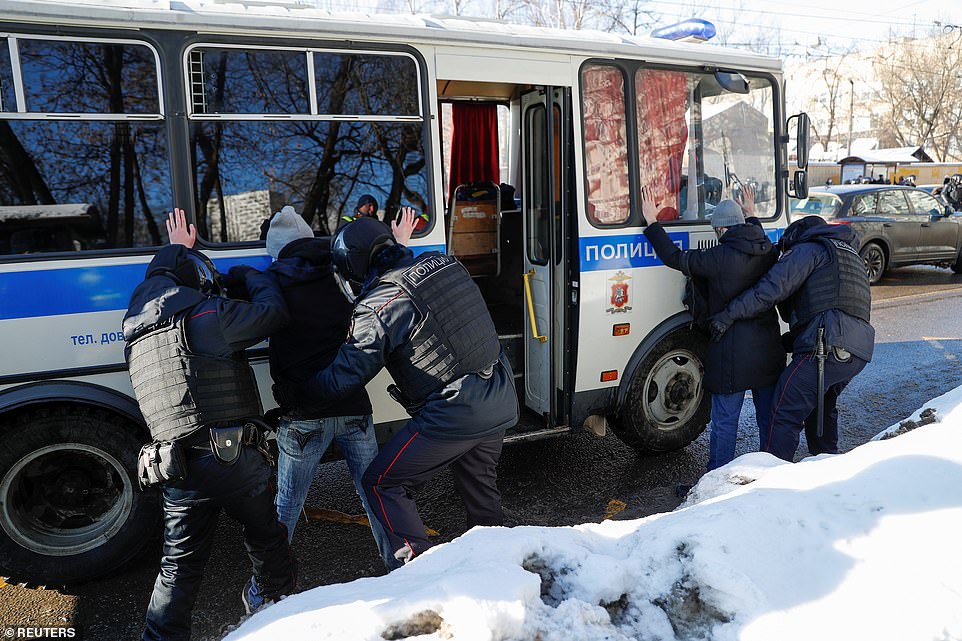 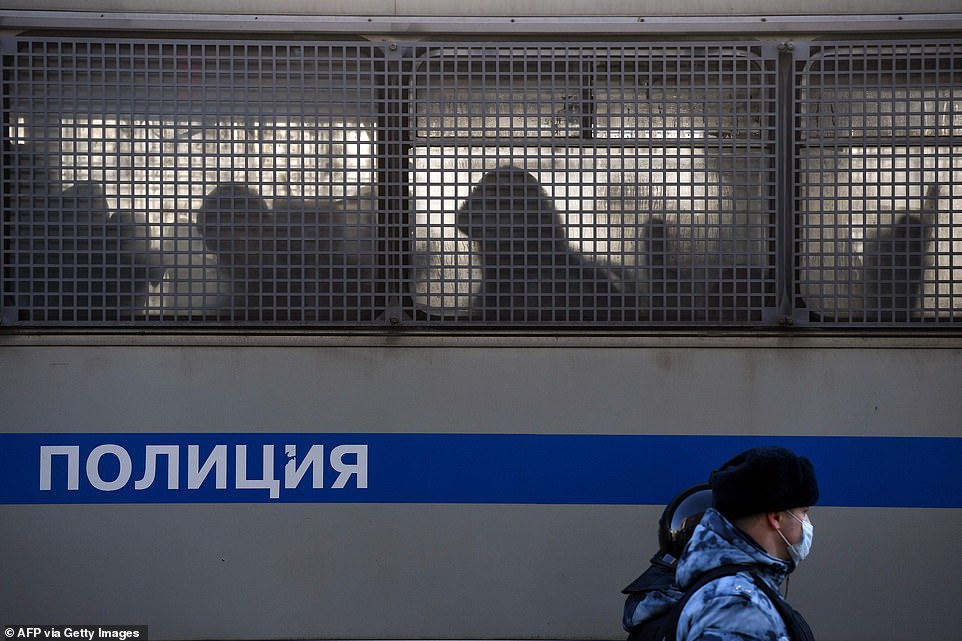 Navalny, who has emerged as Putin’s most prominent domestic political critic over the past decade, believes the 2014 case was punished by authorities for its political activities.

They say the Kremlin is now reviving him to blow his nose.

His arrest on January 17 sparked massive protests across Russia over the past two weekends.

Tens of thousands have taken to the streets to demand his release and sang anti-Putin slogans.

Police arrested more than 5,750 people during Sunday’s rallies, including more than 1,900 in Moscow, the largest number the nation has seen since Soviet times. Some were beaten.

Most were released after subpoena and fined or imprisoned between seven and 15 days.

Several people were prosecuted for alleged violence against the police.

Navalny’s team called for another demonstration outside Moscow’s courthouse on Tuesday.

Police were deployed near the courthouse and the streets nearby were cordoned off for arbitrary detention.

While never holding an elected office, Navalny has made a name for himself with anti-transplant research that exposes the rich lifestyle of the Russian elite. 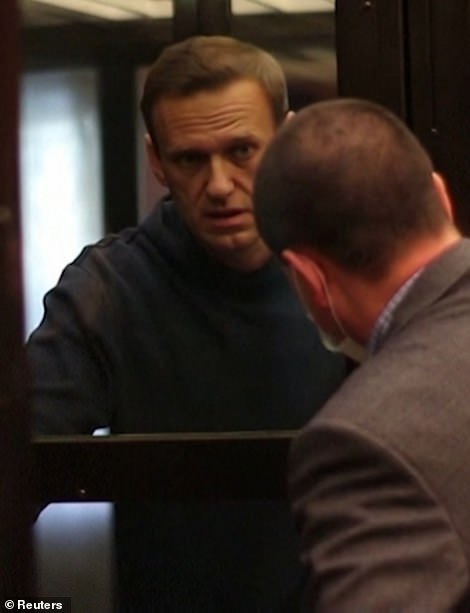 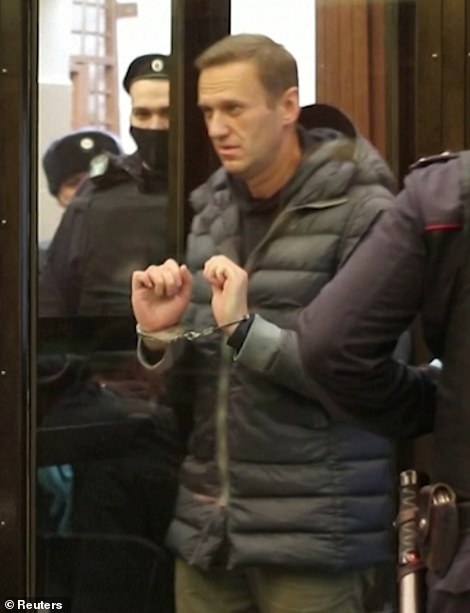 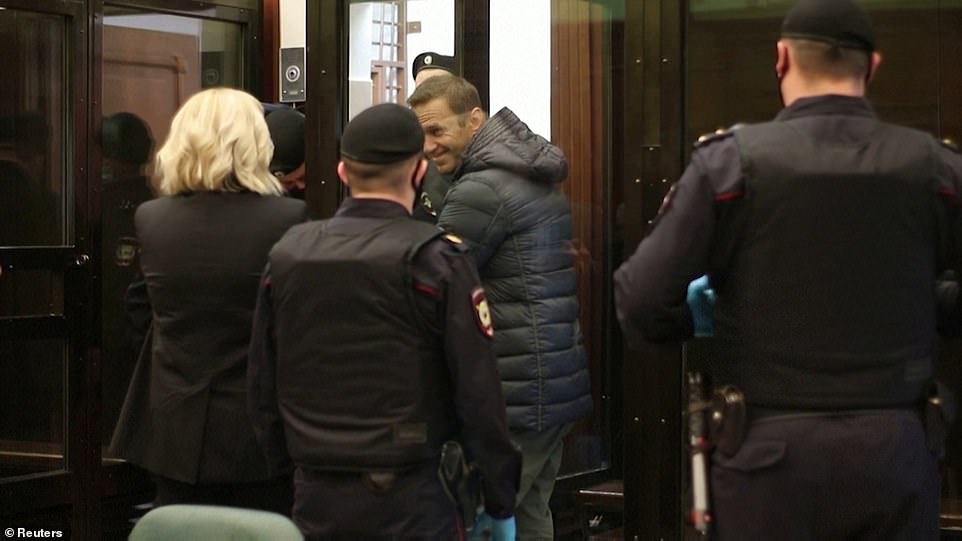 Navalny smiles at his lawyer in the courtroom this morning 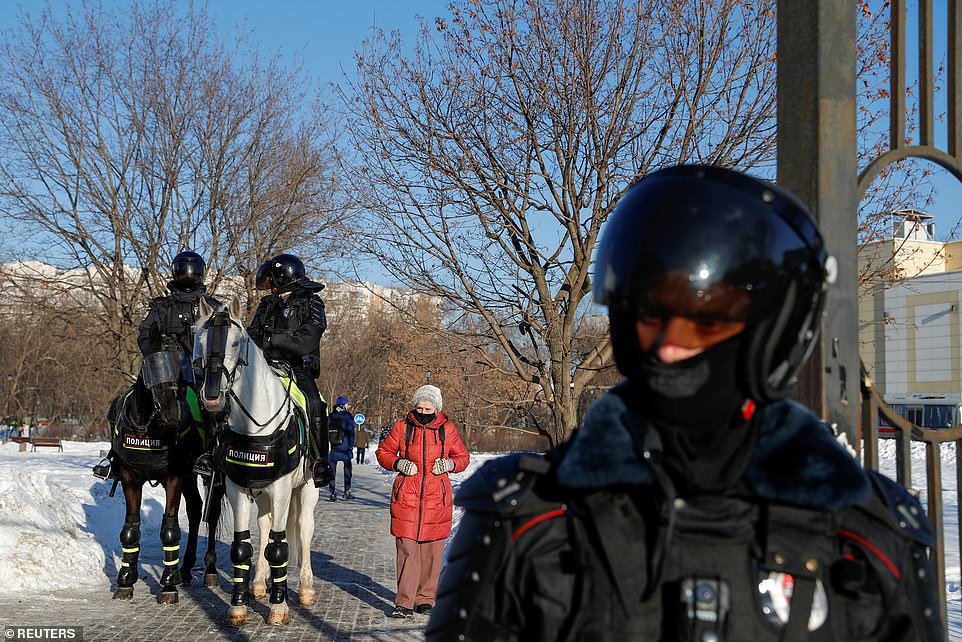 Riot police and mounted officers patrol the court this morning 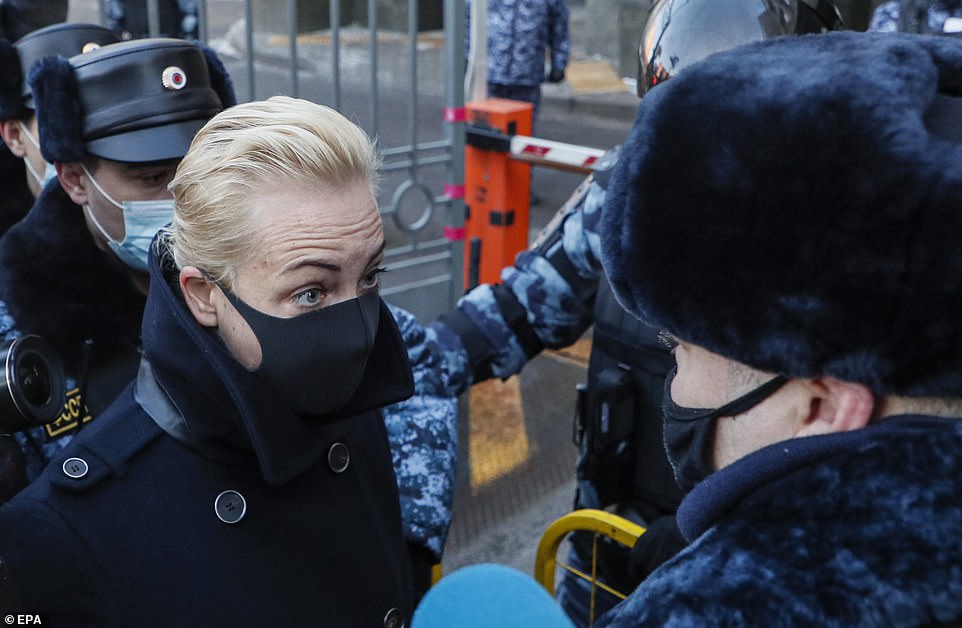 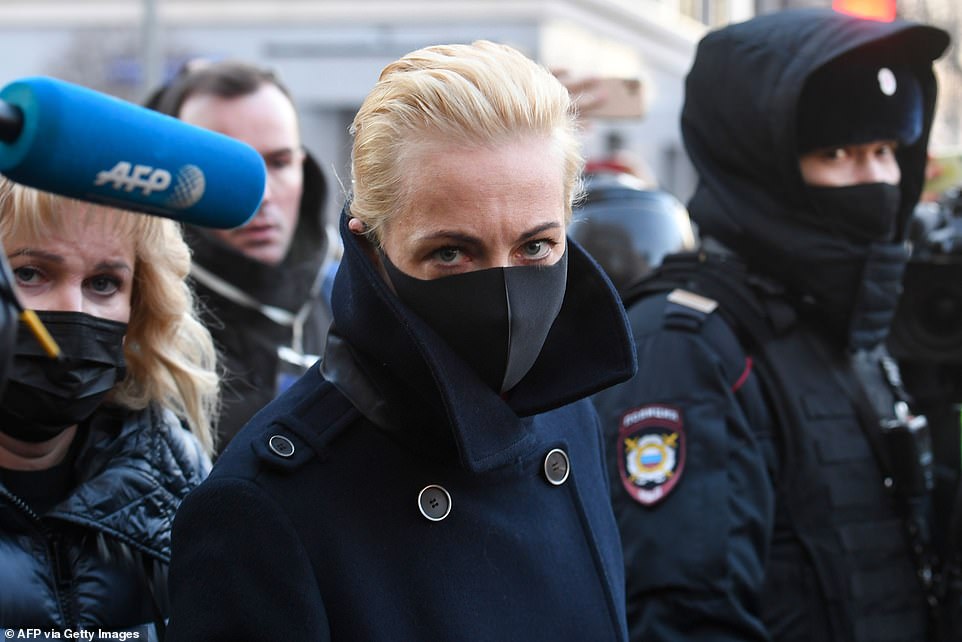 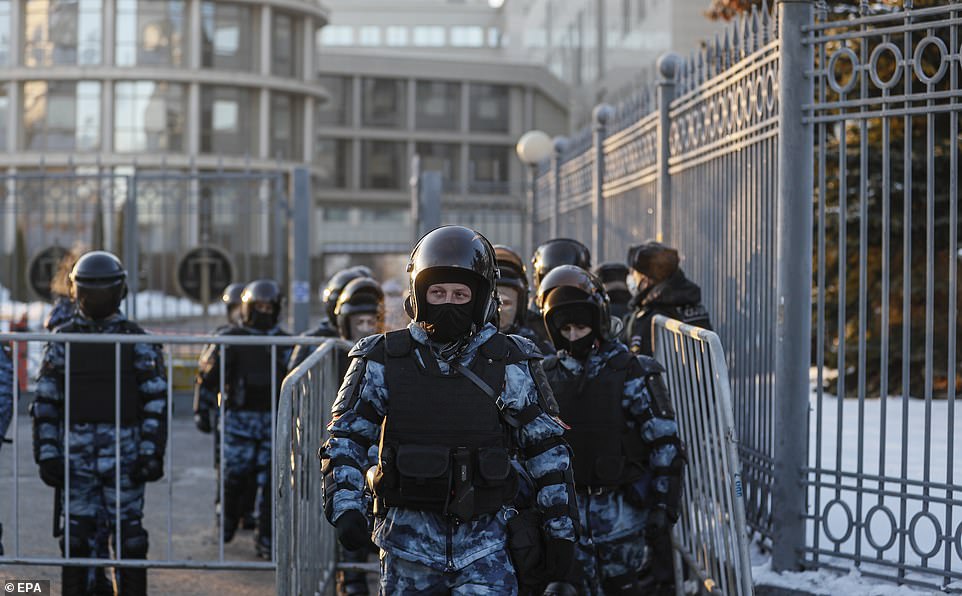 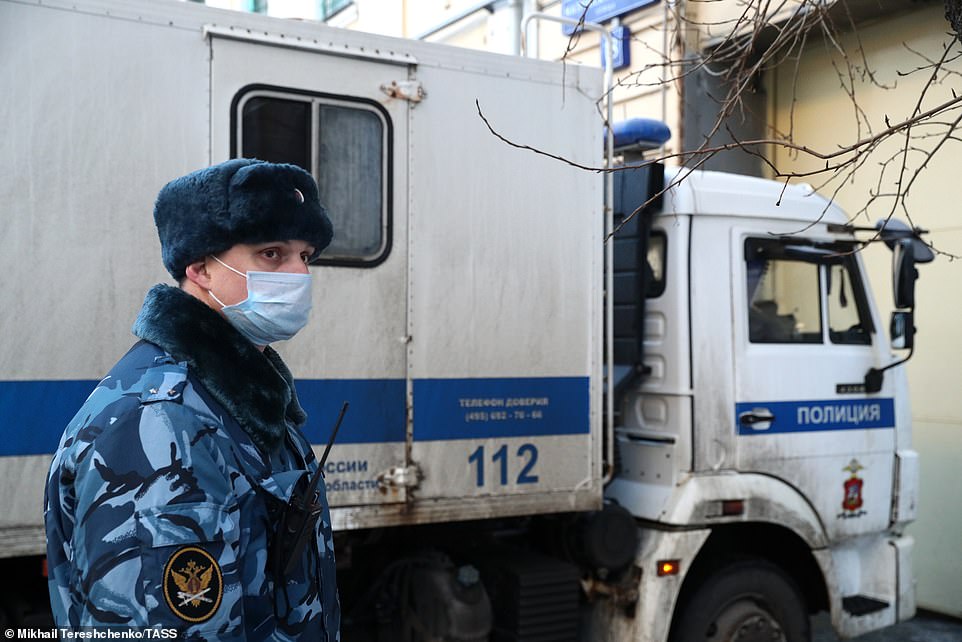 A prison car arrives in court this morning with Navalny 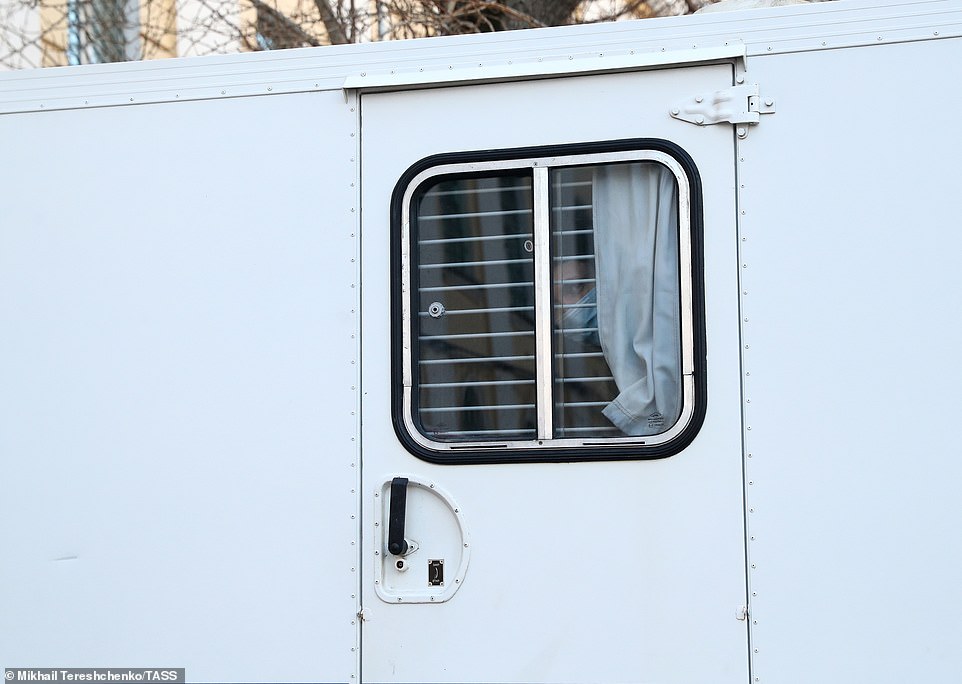 The video has been viewed over 100 million times, fueling dissatisfaction as ordinary Russians grapple with an economic downturn and the coronavirus pandemic.

Putin insisted last week that neither he nor his relatives own any of the properties mentioned in the video, and his longtime confidante, construction magnate Arkady Rotenberg, claimed he owned it.

As part of an effort to quell the protests, authorities have targeted Navalny staff and activists across the country. 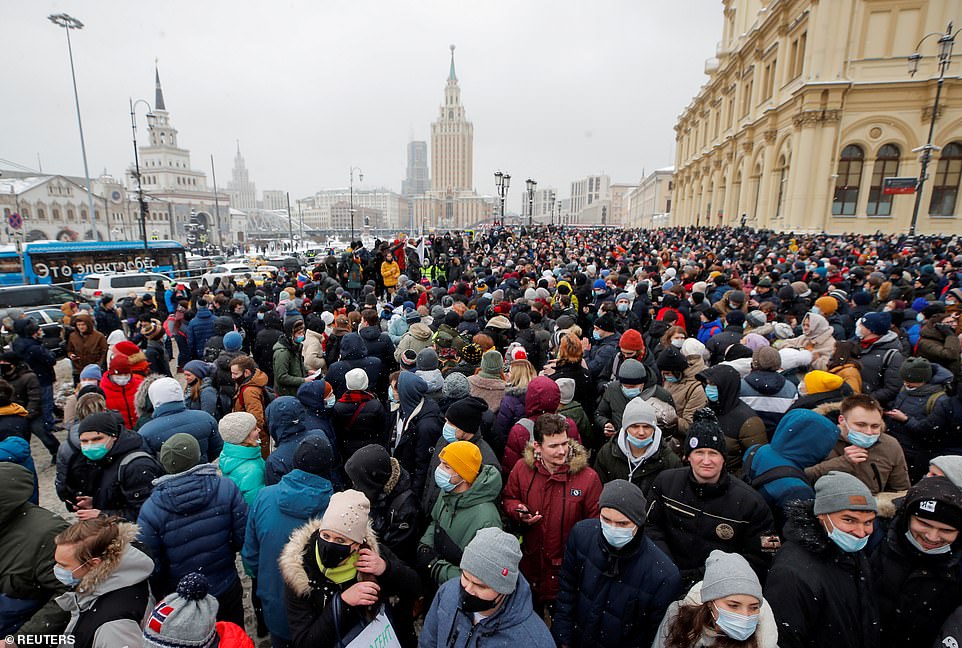 Protesters gather in Moscow in support of Navalny on Sunday

DR. MICHAEL MOSLEY: Why doesn’t the NHS tell you the secret of treating diabetes?