Bottom up! Marston’s comes to the rescue of rival Brains and saves 1,300 jobs as lockdowns marginalize the Welsh brewer

By Tom Witherow for the Daily Mail

Marston’s saved 1,300 jobs after signing a deal to take over more than 150 pubs in Wales.

The future of 139-year-old rival SA Brain & Co had been challenged by a series of severe bans in Wales, forcing them to take “drastic measures” to survive.

The Cardiff group, owned by the same family for 139 years, was forced to close its doors on December 4th when the Welsh government banned alcohol sales in pubs and imposed a 6pm curfew.

He said: “We know and trust that Marston are excellent stewards of our pubs and while this is not a decision we made lightly, we are confident that our pubs and our teams will thrive as well.”

Marston’s will take over the 141 pubs under the Brains brand for a period of 25 years, while another 15 will be operated under management contracts. Brains retains ownership of the pubs and the brewing business. 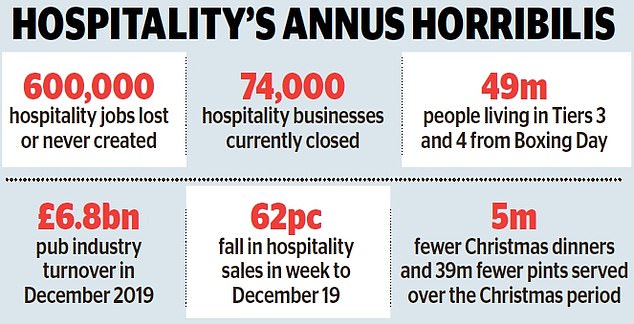 Marston’s boss, Ralph Findlay, praised the “iconic brand” that contributes to his 1,400 pubs estate, including 106 in Wales.

He said, “Bans and restrictions have been very difficult for the sector and Brains has been quite public and said this has put them under enormous financial pressure.

‘You would have been in a difficult position. We were able to give a more positive outlook. ‘

The hospitality sector is experiencing the bleakest Christmas in its history. Tens of thousands of businesses are closing in their busiest time. New restrictions from Boxing Day mean 24 million people in England, or 43 percent of the population, will be in Tier 4.

Another 4 million people will be included in Tier 3 for a grand total of 25 million.

Thousands of other businesses breaking into Levels 3 and 4 in counties such as Suffolk and Northamptonshire are closing.

Nik Antona, campaign chairman for Real Ale, said, “It’s clear that there wasn’t enough support to protect even an established company like Brains. This could be the first of many hotel companies to take drastic measures to survive. ‘

Britain’s largest hotel company, Whitbread, which owns the Holiday Inn and Brewers Fayre pubs, has asked landlords for a 50 percent rent cut over the next three months as demand is expected to decline.

Data from consultants CGA and UK Hospitality showed that eight out of ten venues – 74,000 companies – had closed before the new restrictions were announced. Sales fell by almost two thirds between December 13th and 19th.

Revolut doubles its losses despite profiting from the cryptocurrency boom

As the British prepare for a festive time without their friends, it’s party time in Sydney