Six months post-blast Beirut, the city once known as the Paris of the Middle East, remains in tatters.

Large parts of the historic Middle Eastern capital were destroyed on August 4 when 2,750 tonnes of ammonium nitrate exploded in the port.

But six months on, little has changed and relatives of the 204 victims, including the parents of a 3-year-old girl who was found dead, buried under rubble days after the blast, are still waiting for justice. 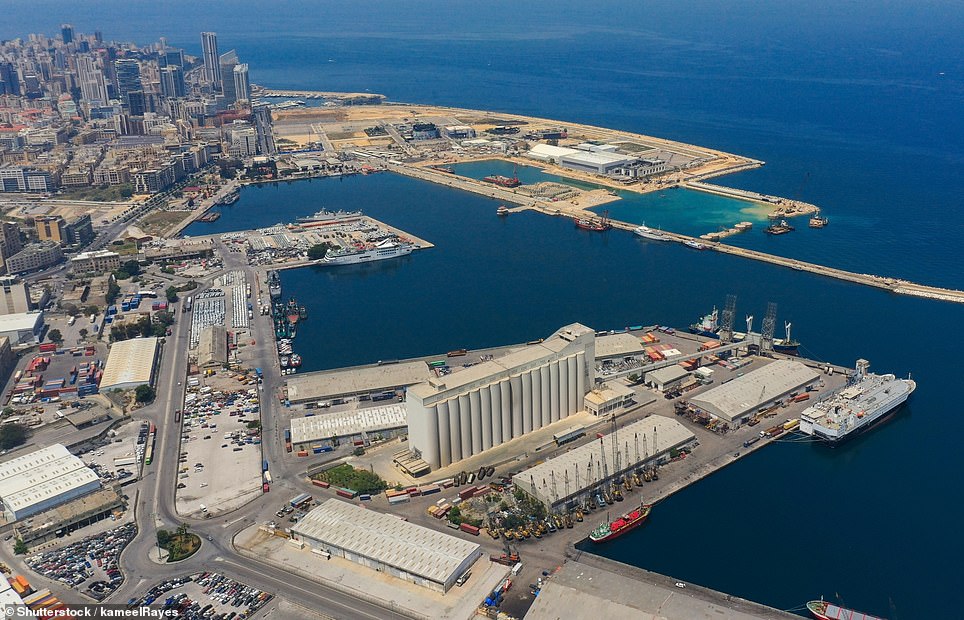 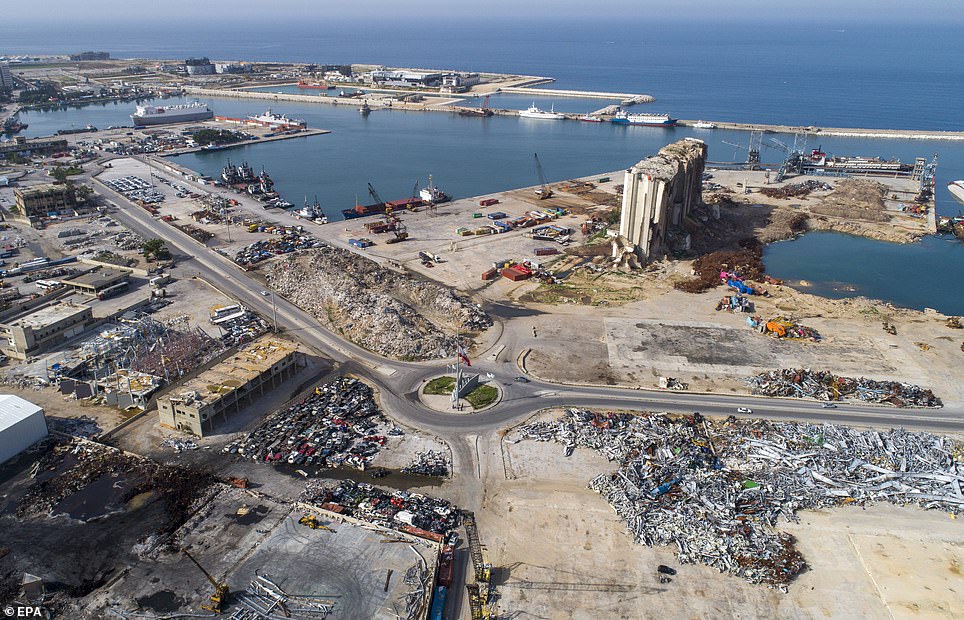 Before and after: Tragic images show how Beirut is still laying in ruins six months after a huge blast wrecked the city and port

A Lebanese investigation into the cause of the blast has so far failed to prosecute those responsible, even though politicians promised in August the probe would only take five days.

More than 30 people, including caretaker Prime Minister Hassan Diab, who stepped down with his cabinet after the explosion, have been charged with criminal negligence over the blast.

However, the probe has been paused since December 17 after two former ministers indicted in the probe requested investigating judge Fadi Sawwan be replaced.

It remains unclear when, or if, the investigation will resume. 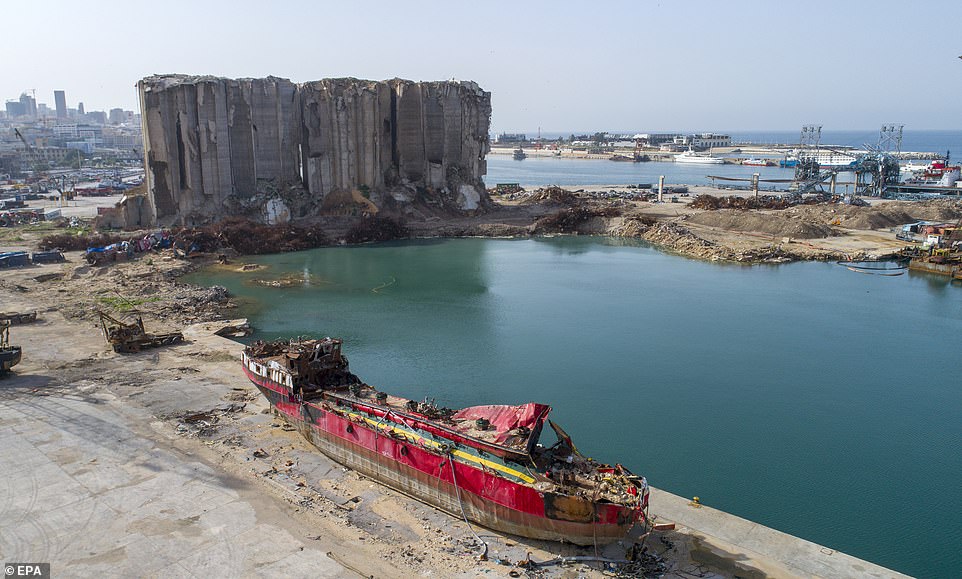 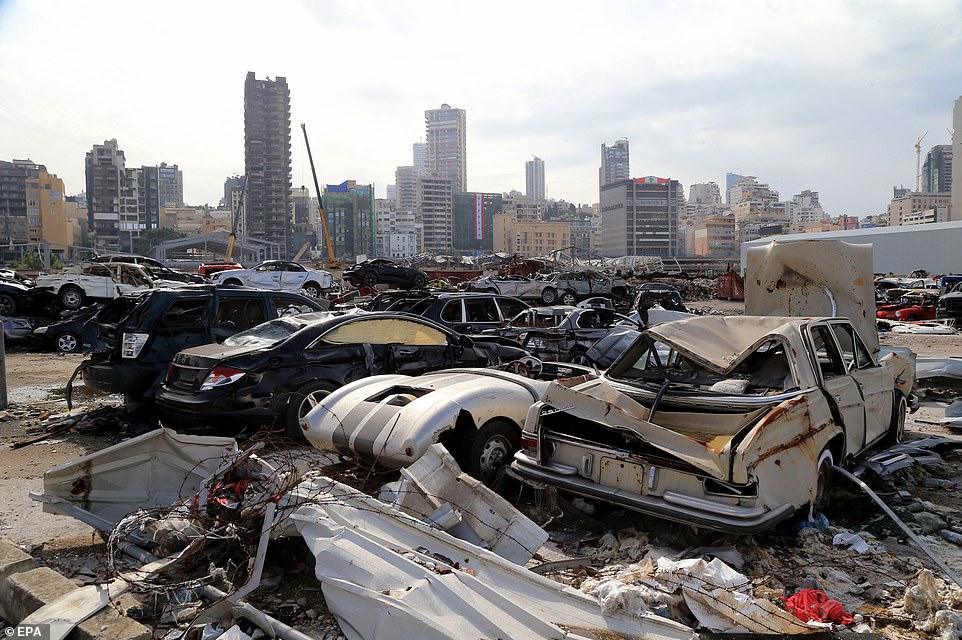 NOW: Cars turned into scrap metal when 2,750 tonnes of ammonium nitrate exploded nearby on August 4 remain in the port six months after the incident happened 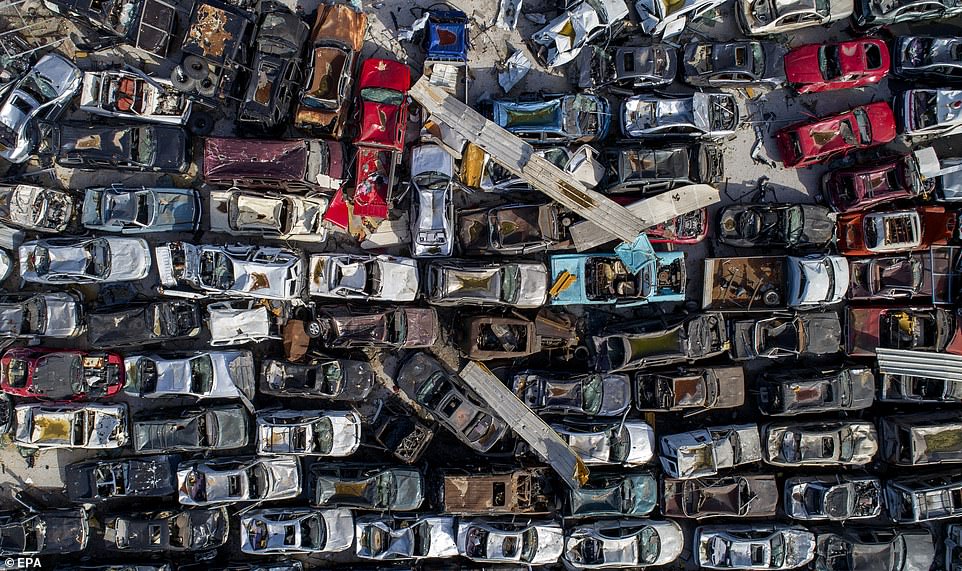 NOW: Imported and damaged cars at the destroyed port area have been abandoned 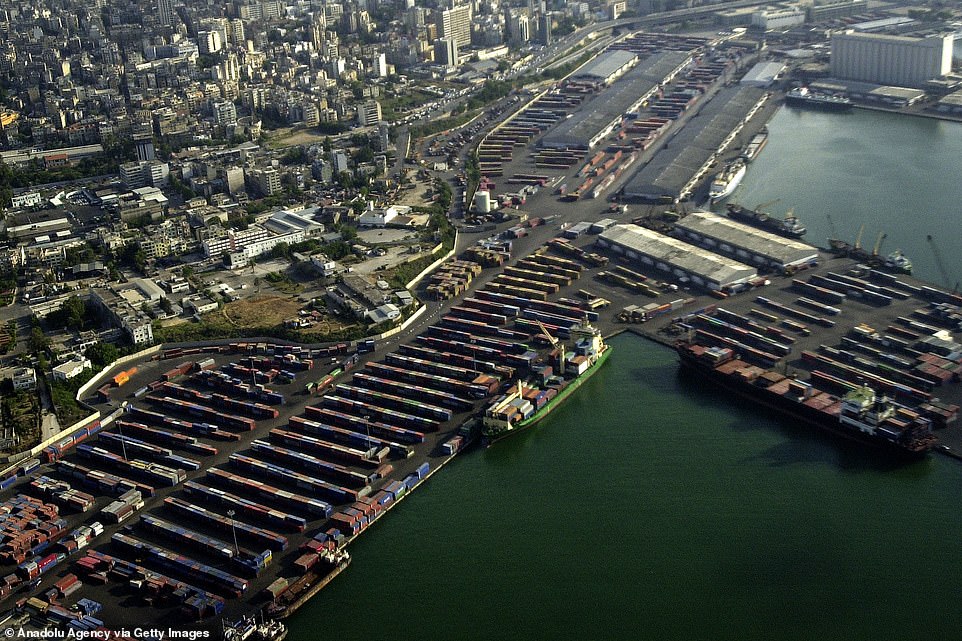 BEFORE: Beirut’s port was the largest shipping and clearing point in Lebanon, through which approximately 70 per cent of the incoming and outgoing trade traffic to and from the country used to pass before the blast 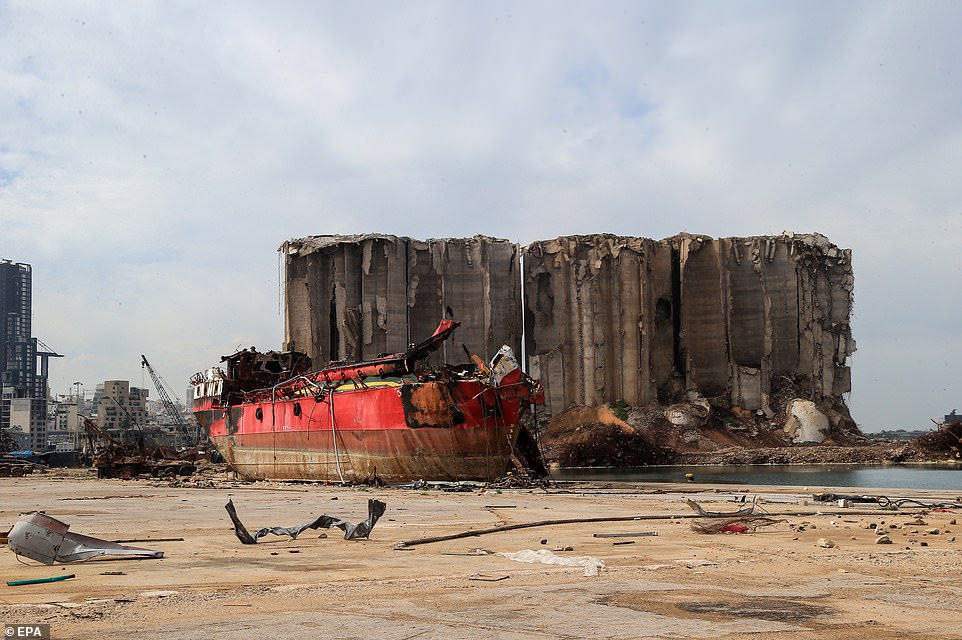 NOW: Discarded metal lies strewn across the wasteland of Beirut port in front of grain silos that were destroyed in the blast 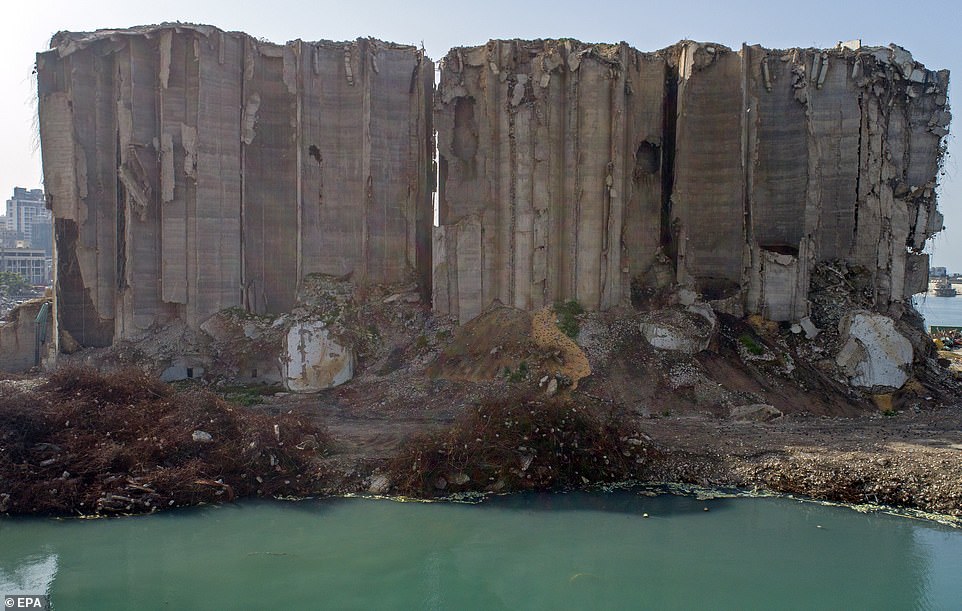 NOW: The damaged grain silo and a large crater where a warehouse that stored 2,750 tonnes of ammonium nitrate stood have not been repaired since Beirut blast six months ago 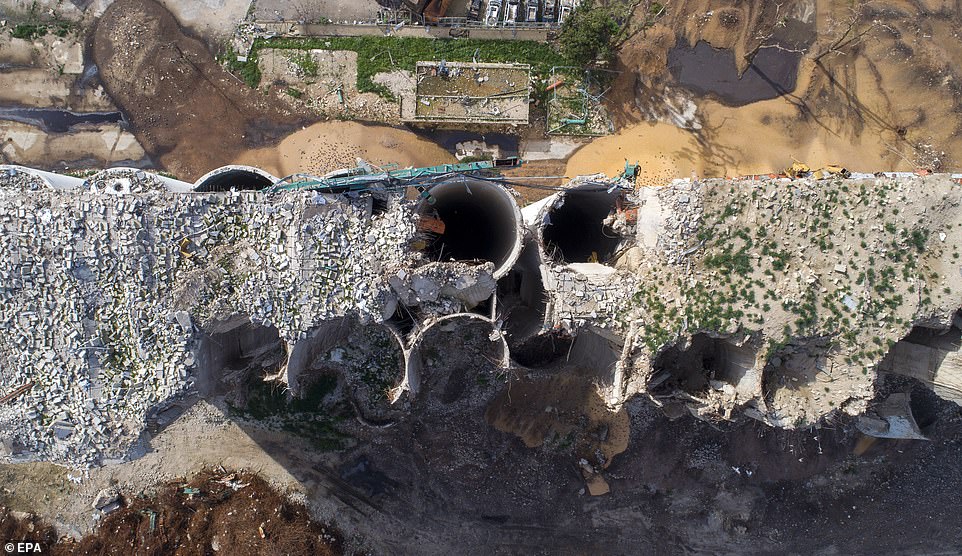 NOW: An aerial view of Lebanon’s grain silos which were next to warehouse 12, where 2,750 tonnes of ammonium nitrate was stored unsafely for 7 years before it exploded NOW: A picture taken with a drone shows a burnt out warehouse that is still laying in ruins six months after the blast 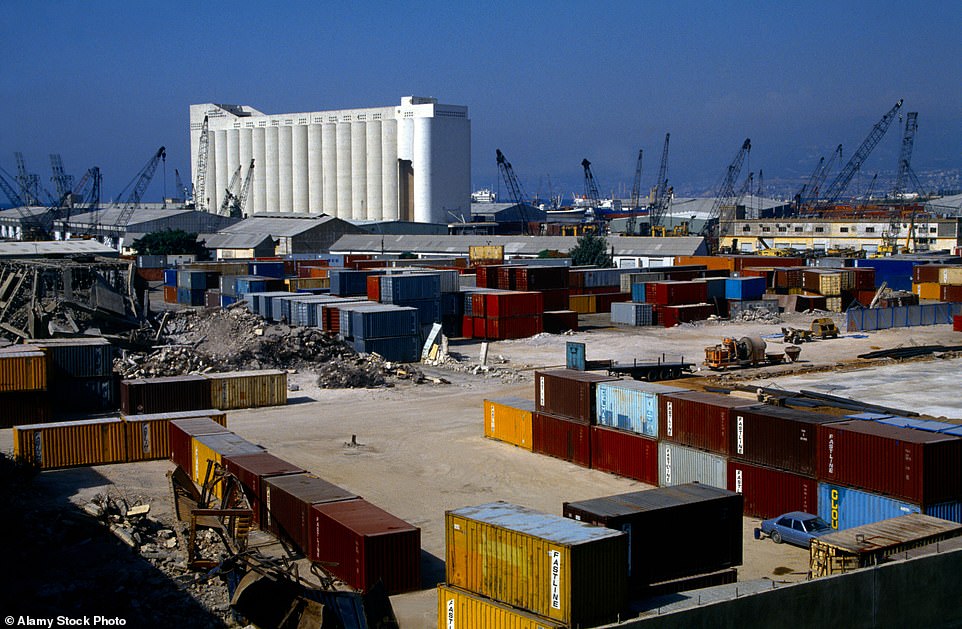 BEFORE: The grain silo in Beirut’s port was the country’s only large grain silo. The blast left the country without a strategic stockpile of grains 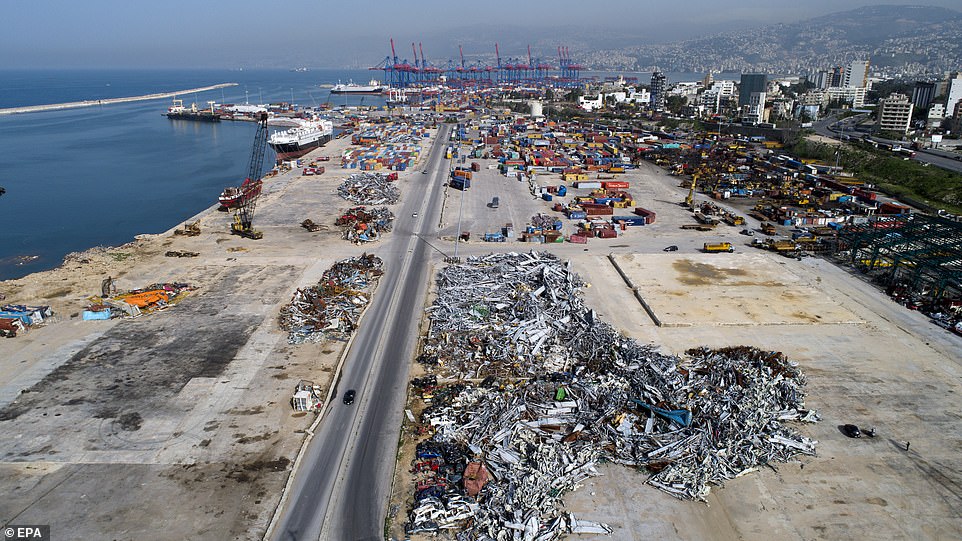 NOW: Beirut’s port has become a desolate wasteland since the blast last August 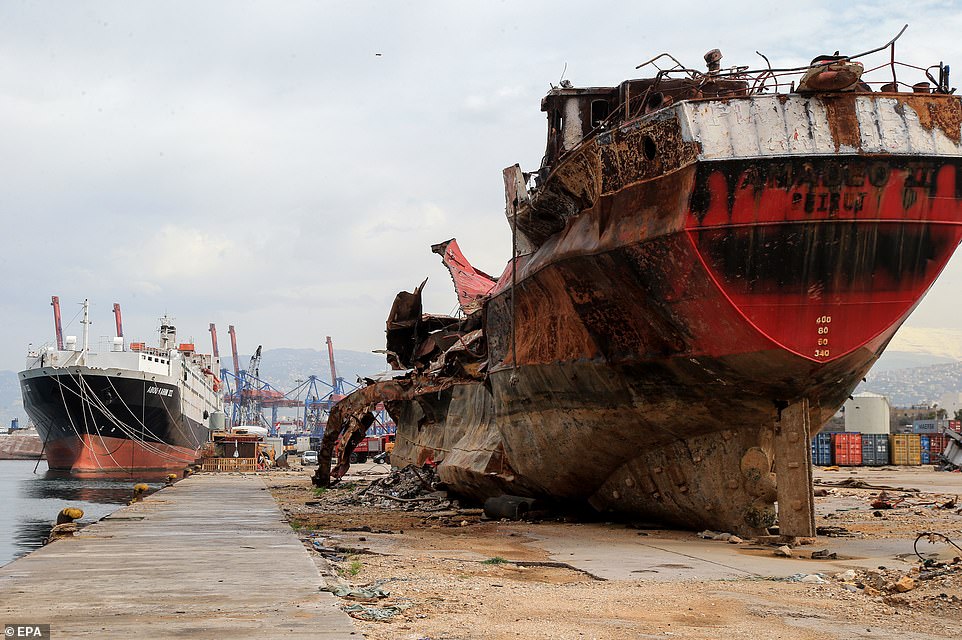 NOW: A Lebanese investigation into the cause of the blast has so far failed to prosecute those responsible for the destruction

Investigations led by the Federal Bureau of Investigation (FBI) and France also failed to determine the cause or who was culpable for the blast.

The explosion was seen by many as the culmination of years of negligence and mismanagement of the state by politicians.

Letters showing Diab and President Michel Aoun were aware the ammonium nitrate was stored in the port’s warehouse 12 surfaced in the days after the blast. 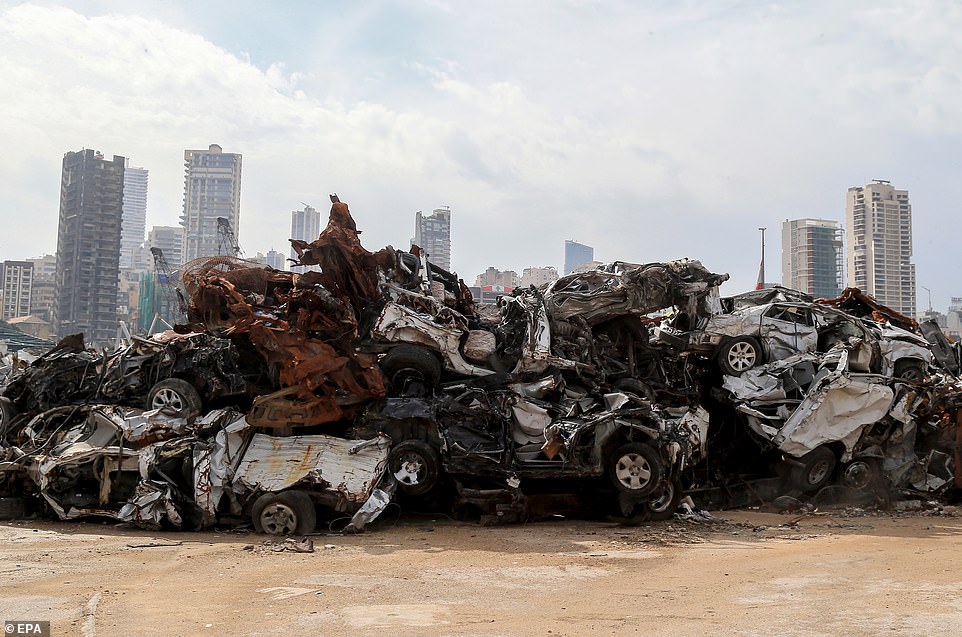 NOW: Scrap metal remains piled up in Beirut. Attempts to form a new government to help Lebanon recover from the blast have so far failed 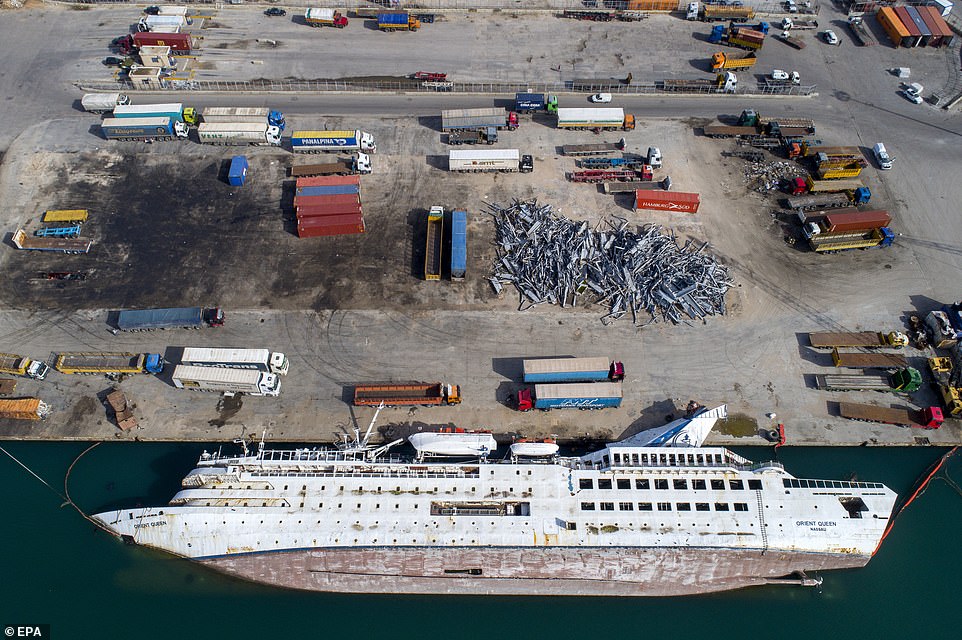 NOW: The Beirut port remains in disarray and those responsible have not been brought to justice

The pair were repeatedly warned by security officials and customs chief Badri Daher that the dangerous substance was stored in the port but failed to take action.

The ammonium nitrate first arrived in Beirut in July 2013 onboard the MV Rhosus, a Moldavan-flagged tanker.

The ship was abandoned in Lebanon and the highly explosive unloaded into the port, where it sat for seven years before it exploded. 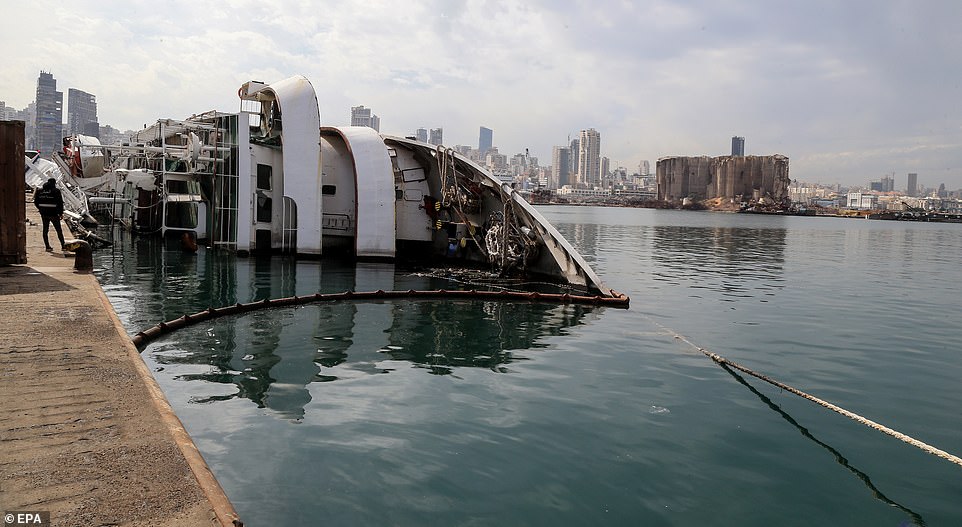 NOW: The owner of the cruise ship, the Orient Queen (pictured), has sued those responsible for the Beirut blast which led to the loss of her 300 person vessel 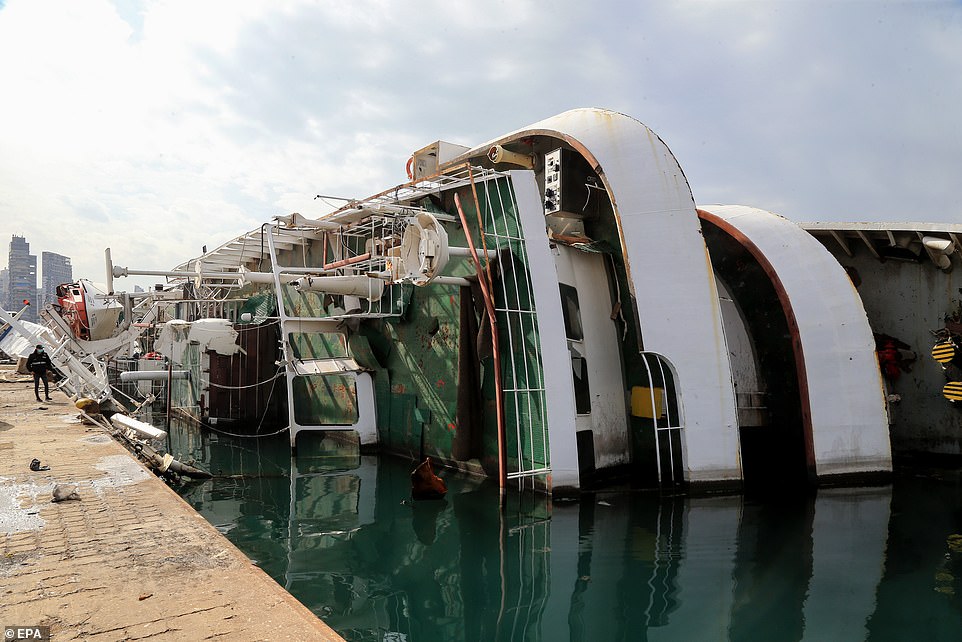 NOW: The Orient Queen, a cruise ship in Beirut port on August 4, remains half submerged six months after it was destroyed in explosion 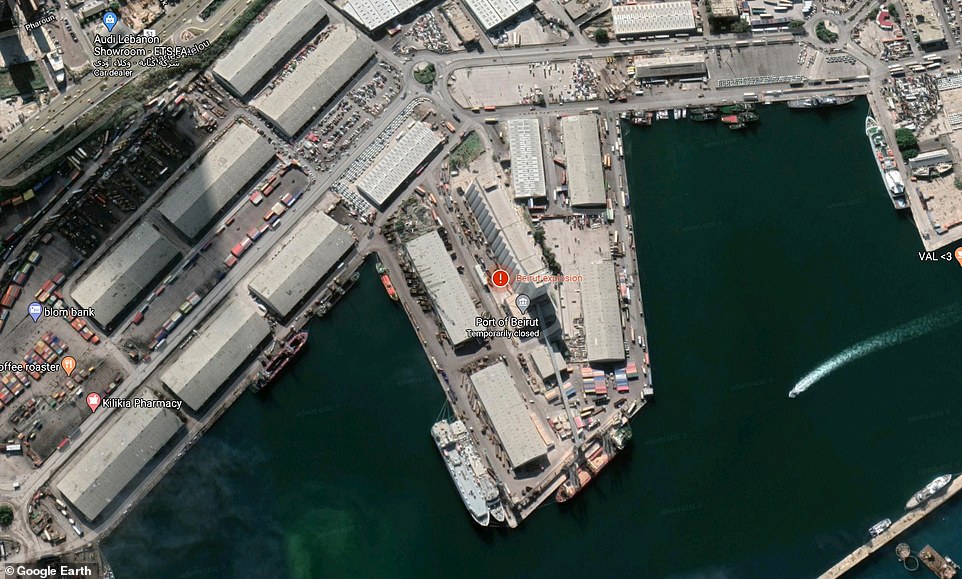 BEFORE: Lebanon is heavily dependent on imports which arrive through the Beirut port. However, after the explosion many ships were directed through to the port in the northern city of Tripoli 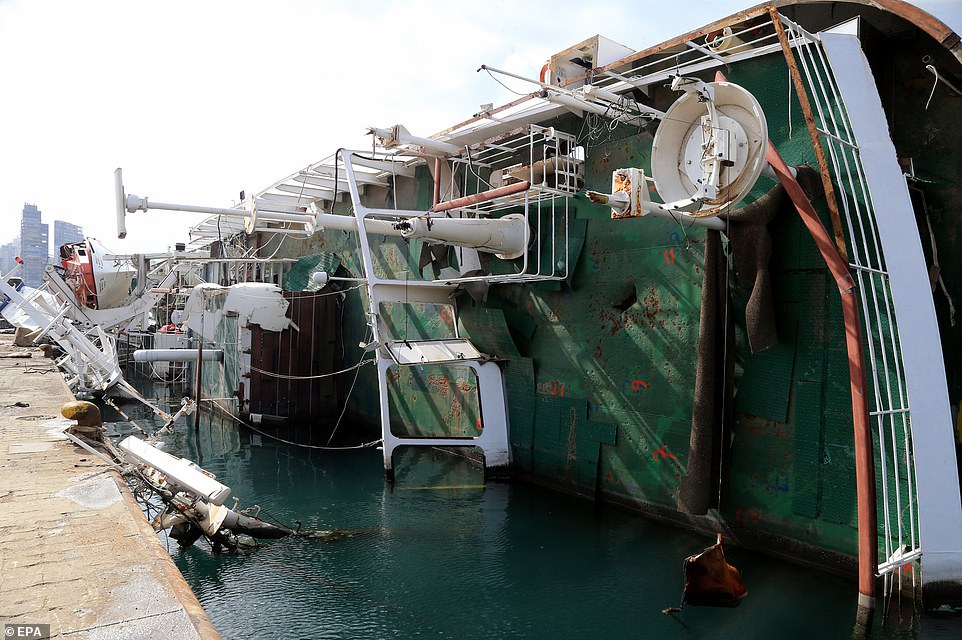 NOW: Two crew members of the Orient Queen were killed in the blast when the shockwaves from the massive explosion caused the ship to capsize