Kike Garcia points to the stands to tell his own TEAM-MATE to shut up instead of celebrating the Screamer against Real Madrid … as the Eibar striker says, left-back Jose Angel “always reaches for me”

By Spencer Morgan for Mailonline

Eibar striker Kike Garcia scored one of the goals of his life against Real Madrid on Sunday and called on one of his teammates in the stands to shut up.

Eibar had lost 2-0 after just 13 minutes in the La Liga duel before Kike came back on the side in the middle of the first half with a breathtaking curling hit from outside the box.

Instead of partying, however, he went to the stands in search of someone.

Scroll down for video 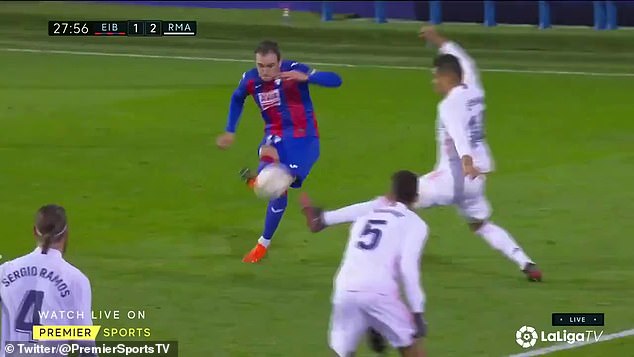 Marc Anthony's huge and amazing Florida mansion on the market

Trump is said to have talked about pardoning himself