In the first quarter, Rolls-Royce recorded an increase in sales to the highest level in its history

At Rolls-Royce Motor Cars, sales rose to the highest level in its 116-year history, as well-heeled buyers buy the luxury vehicles despite the pandemic

This year, Rolls-Royce Motor Cars achieved the highest sales figures in the first quarter of its 116-year history.

The luxury automaker showed that a pandemic won’t bother well-heeled drivers after their next rolls, and delivered 1,380 cars to customers in the first quarter.

This is 62 percent more than in the same period of the previous year and even exceeds the Group’s previous sales record for the first quarter of 2019.

“We have reacted to the latest challenges with our usual boldness,” said Rolls-Royce Motor Cars boss Torsten Müller-Ötvös

Rolls, which sells its engines around the world, said demand for its models has been “extremely brisk” with the Ghost model launched last year being a buyers favorite.

The Cullinan super-luxury SUV has also proven successful with customers, with the company saying its order books for all models extended well into the second half of the year.

Rolls said its custom car backlog also hit record levels for the quarter. More and more high net worth customers wanted a personalized car to be used or driven around.

Custom engines shipping this year include the “Koa Phantom” and the “Iridescent Opulence Phantom”. All 20 vehicles in the Phantom Tempus Collection have been assigned to customers worldwide, Rolls added.

Across all business areas, the group stated that sales were particularly strong in China, the United States and the Asia-Pacific region. 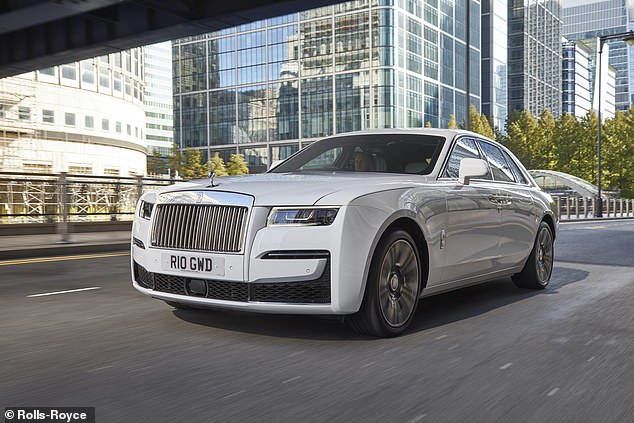 Stark: Rolls-Royce said its backlog expanded well into the second half of the year

The Group’s CEO, Torsten Müller-Ötvös, said: ‘Rolls-Royce Motor Cars made a good start into 2021, which is reflected today in our sales figures for the first quarter, which are the highest in our 116-year history.

‘With solid order books across our product range, especially for the new Ghost and Cullinan, increasing sales in key markets and tailor-made commissions at record levels, our business is in excellent shape.

“We have every reason to be optimistic about the rest of 2021.”

He added, “We have responded to recent challenges with our usual audacity, imagination and ingenuity, which has been underpinned by careful planning and a relentless focus on the needs and requirements of our customers.”

Earlier this week, new numbers from the Society of Motor Manufacturers and Traders showed new car registrations rose for the first time since August last month, but remain declining in retrospect to the 10-year average for the month.

Around 8,300 new registrations are required every day in order to reach the average prepandemic level again by the end of the year, added the SMMT.

What is the microchip shortage and what are the long-term effects?

Here you can enjoy the unusual mushrooms

Marine FC made £ 75,000 in profit from their FA Cup clash with Tottenham, which was selected for the BBC broadcast