IAG, the owner of British Airways, Iberia, Vueling and Aer Lingus, has announced that it will increase the number of flights this summer as the company posted losses of € 2 billion in the first six months of this year.

The company said it plans to increase passenger capacity to 45 percent of pre-Covid levels between July and September, from just 20.8 percent in the first half as demand for flights rises.

It is because the government has abolished quarantine rules for visitors who received two vaccinations this week in the US or Europe, although the rule initially only applies to people from Amber List countries who come to England.

IAG hopes to fully reopen its lucrative transatlantic flights between the UK and the US, but warned against it its plans to increase capacity “remain uncertain and are subject to ongoing review”.

British Airways suffered from the “limited” number of countries on the “green” list in the UK, which “severely limited the capacity recovery expected after the lockdown restrictions were lifted”.

“The low capacity also contributed to restrictions that other governments have put in place on travelers from the UK in response to the Delta COVID-19 variant,” she added.

Iberia and Vueling performed better thanks to fewer restrictions on routes from Spain to South American countries such as Colombia and Ecuador.

The capacity of Aer Lingus is still “severely limited by the strict restrictions of the Irish government”, with the passenger load factors averaging only 20 percent.

Overall, the group does not assume that passenger demand will recover to pre-pandemic levels before at least 2023.

On top of that, travel restrictions are constantly changing, with a bitter dispute looming today over Britain’s restrictions on France, the risk of Spain being hit by quarantine rules – and Italy refusing to exempt Britons from self-isolation.

Luis Gallego, CEO of IAG, said, “In the short term, our focus is on ensuring that we are up and running so that we have the flexibility to capitalize on an environment where there are signs of widespread backlog when travel restrictions are lifted.

“This is reflected in the results from Iberia and Vueling. They were the best performers within the group in the second quarter, reflecting stronger Latin American and Spanish domestic markets driven by fewer travel restrictions. ‘

He added: “We welcome the recent announcement that fully vaccinated travelers from amber countries in the EU and US will no longer need to be quarantined upon arrival in the UK.

“We see this as an important first step towards the full reopening of the transatlantic travel corridor.” 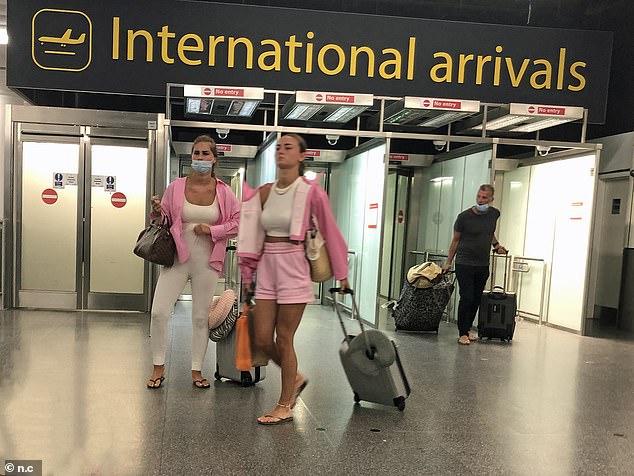 The government has abolished quarantine rules for visitors who received two vaccinations in the US or Europe this week, although the rule initially only applies to people from Amber List countries coming to England

This is because the company posted an operating loss of € 2 billion, or £ 1.7 billion, for the half-year ended June, which is half of the € 4 billion loss in the same period in 2020 when the pandemic began.

Despite the narrowing of losses, IAG shares fell 6.8 percent in Friday afternoon trading to 169.20 pence and fell 7.5 percent shortly after the London market closed at 168 pence.

Revenue fell 58 percent to 2.2 billion euros, with a strong performance at Cargo being offset by a 72 percent drop in passenger revenue.

Despite the overall declines, the trends improved in the second quarter with a sales increase of 77 percent compared to the same point in time in 2020.

Gallego said British Airways saw a 95 percent increase in bookings for flights from the US to the UK shortly after it announced on Wednesday that it would ease travel rules compared to the same period last week.

When asked whether the planned end of vacation in September could lead to further job losses in the UK, he replied: “We would like the vacation program to be extended until the end of the year.”

He added: “At the moment we are not thinking about cutting any further, but we definitely need to watch the situation evolve.

“With the plans we have right now, our plan is to fly, people want to fly, and for that we will need our people.”

In April 2020, British Airways announced the shedding of up to 12,000 jobs in response to the virus crisis.

NOTE: Cats are waiting for the cream on Telit sales

I’m Your Wife Review: An insightful, but flawed, reversal of the macho mob movie