For the first time this year, no state in the country has seen an average of more than 10,000 new COVID-19 cases in the past seven days, as reported Tuesday. This was the latest encouraging sign of pandemic progress.

The COVID Tracking Project found that every single state has seen a decrease in numbers compared to January.

Nationwide, the seven-day moving average of daily cases is 75,518, compared to 209,945 a month ago, according to data from Johns Hopkins University.

New York, California, Florida, and Texas remained the hardest hit states – but all had an average of fewer than 10,000 new cases in the past seven days.

Meanwhile, the 7-day average of new daily deaths is down 30 percent from the January 13 high, with the fewest deaths recorded on a Tuesday since November 3

And the hopeful trend can not only be observed in the USA. The World Health Organization (WHO) reported a 16 percent decrease in new cases last week compared to the previous week.

According to the WHO, the worldwide mortality rates also decreased by 10 percent compared to the previous week. 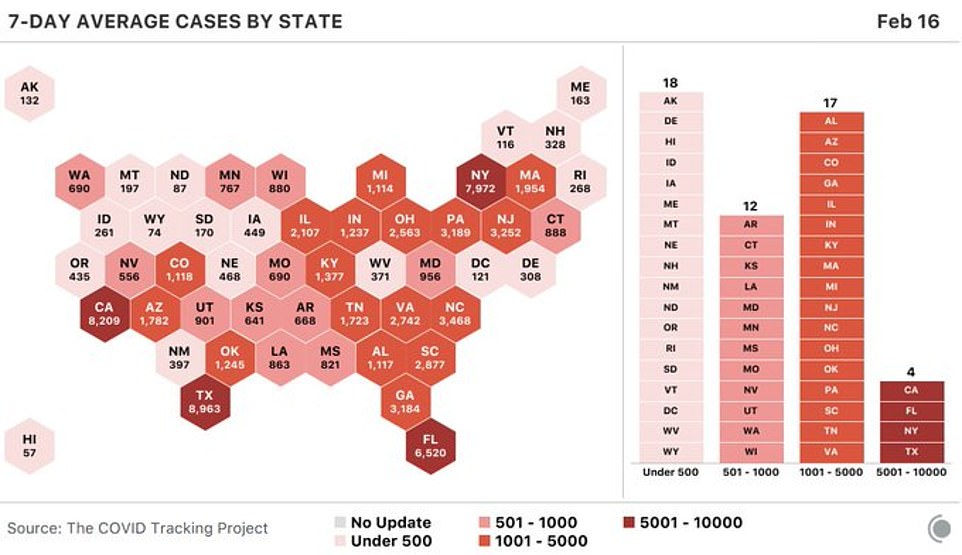 New daily cases have decreased in all 50 states compared to last month, with none reporting more than 10,000 new COVID-19 infections on any given day 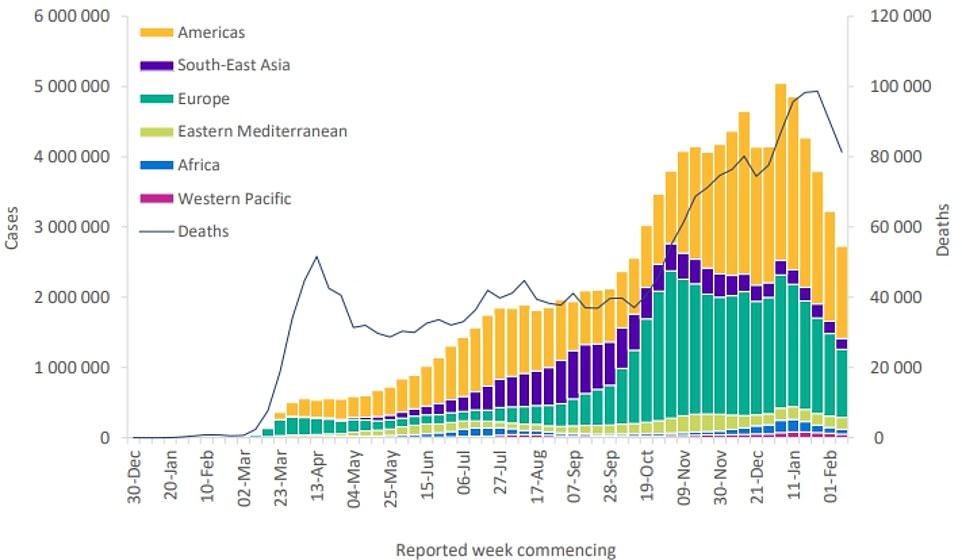 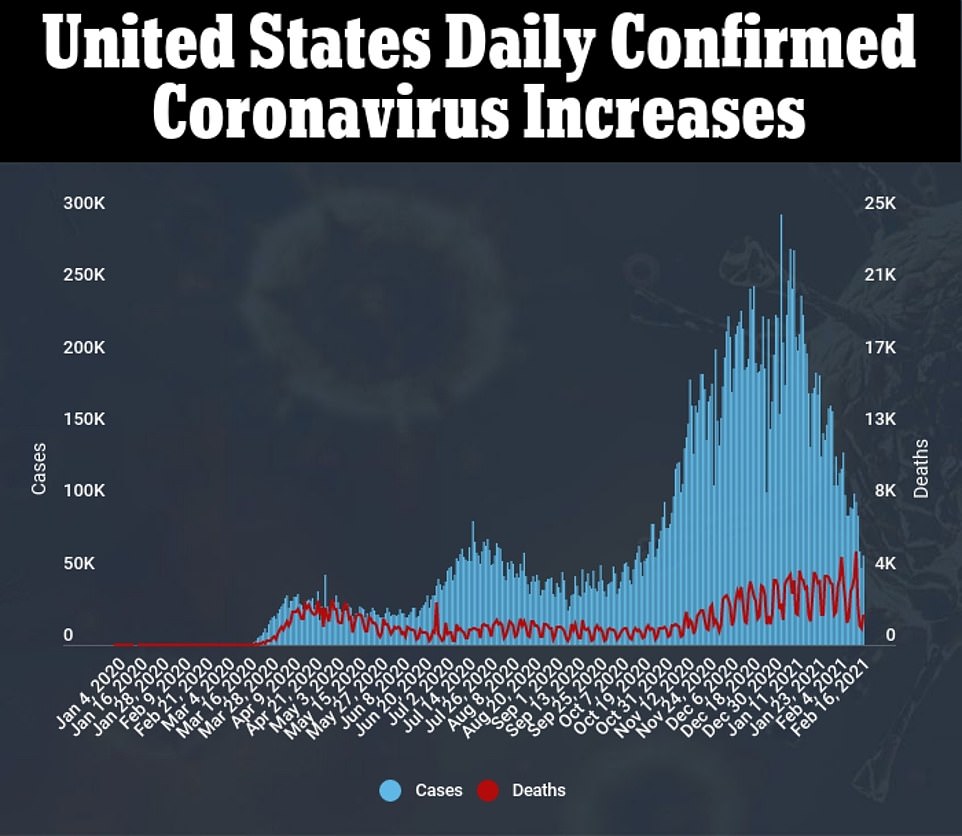 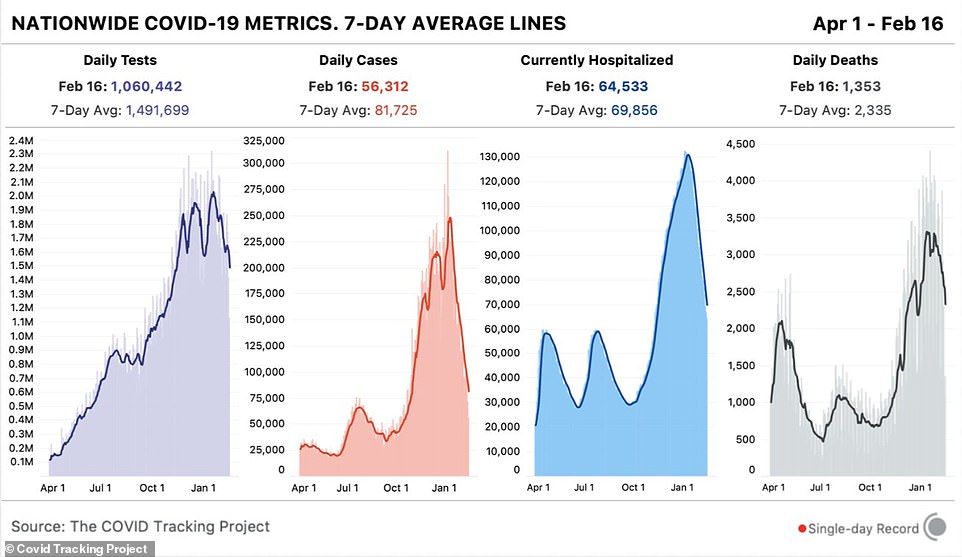 In the US, the decline in new cases, deaths, and hospitalizations has been fairly persistent, but health professionals remain concerned that this trend, while encouraging, is just as fragile.

“The cases have been falling for five weeks,” said Dr. Rochelle, director of the Centers for Disease Control and Prevention (CDC), during a Covid Response team briefing at the White House on Wednesday.

She found that new infections have decreased by 22 percent in the past week.

According to the Johns Hopkins University, 62,398 new cases were reported in the United States on Tuesday.

The seven-day moving average for new cases is now around 75,000, according to Hopkins, despite Dr. Walensky says the CDC’s estimate is closer to 86,000.

At the same time, hospital stays have fallen. There are currently around 7,700 new admissions daily, said Dr. Walensky. This corresponds to a decrease of 22 percent compared to mid-January.

Deaths have remained more volatile and are not yet falling as much as cases or hospitalizations.

However, according to Johns Hopkins, an average of 2,482 Americans still die from COVID-19 each day (the CDC estimates a higher average daily death rate).

“This is a painful reminder to all of those we have lost and continue to lose – our family members, neighbors and colleagues – of this pandemic,” said Dr. Walensky.

“We are still in the midst of a very serious pandemic and we still have more cases than we did at the height of last summer. The continued proliferation of variants could jeopardize the progress we have made over the past month if we lose our vigilance. ‘

She also reported on the discovery of the first ‘Bristol’ variant of the coronavirus in the US, although she said where it had been identified.

The Bristol variant has the same mutations as the B117 variant previously discovered in the UK.

But it also has a mutation known as E484K. This mutation also occurs in the South African variant and has worried scientists because it could weaken the effects of vaccine-induced antibodies. 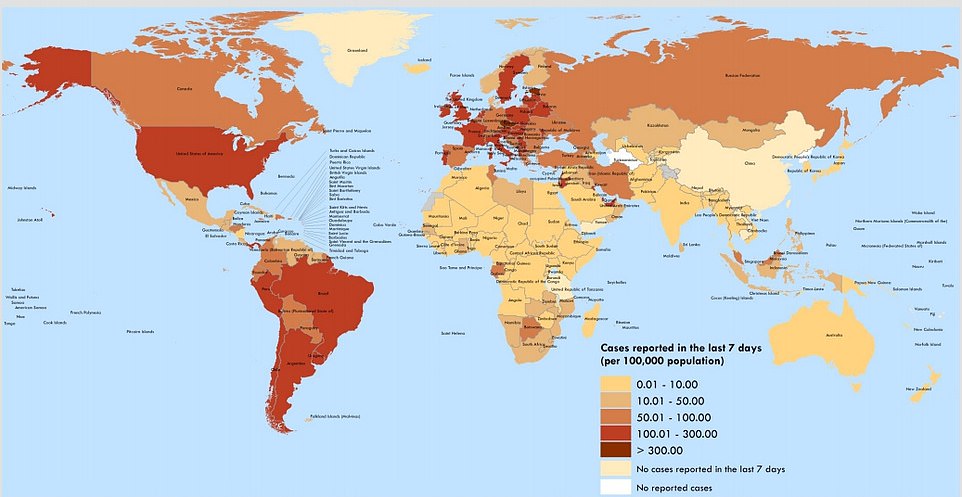 Few places in the world reported more than 400 new cases per 100,000 residents last week, suggesting the pandemic is subsiding globally

Variants from the UK – including the ‘Kent’ and ‘Bristol’ variants – South Africa and Brazil have all made their way into the US.

America also has several variants of its own, including one that first appeared in California and appears to have “fused” with the Kent variant to form a new variant in at least one American patient.

And the developed forms of the virus are popping up around the world. The British Kent variant sparked a massive surge in cases there, and US experts suspect that it will dominate the US as early as next month, potentially leading to a further surge in cases.

Currently, domestic and international cases are declining, despite the variants, and even before vaccines have had a significant impact on the pandemic.

Some of the hardest hit states in the US are still seeing high daily case numbers – but not as high as before.

Wyoming and Hawaii at the other end of the spectrum both reported seven-day moving averages in the single digits. 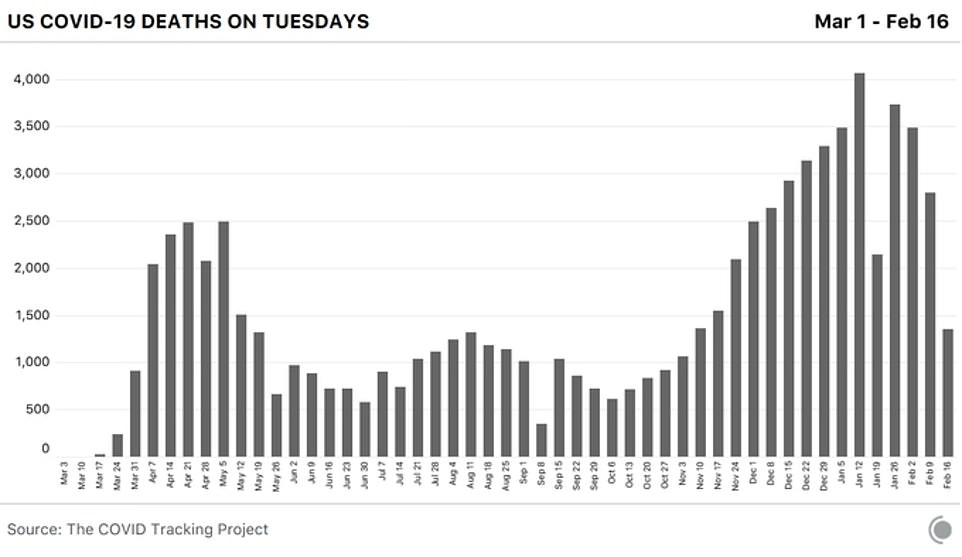 The US has seen no fewer than 1,500 deaths on a Tuesday since late November

The researchers reported 56,000 new cases from 1.1 million tests on Tuesday.

They found that currently 64,533 people with COVID-19 have been hospitalized and 1,353 deaths have been recorded.

Tuesday’s data is the latest hopeful sign that the pandemic may finally be on the decline.

President Joe Biden vowed Tuesday that the COVID vaccine would be available to every American “by the end of July,” with millions of additional doses on the way.

He predicted that herd immunity could be achieved as early as Christmas.

Biden made the pledge during a CNN town hall about the pandemic when his government asked questions about their target numbers to get the vaccine into every American’s arms.

The first question from presenter Anderson Cooper was, “When can any American who wants to get a vaccine?”

He claimed that when he took office on January 20, there were not enough vaccines available.

“We came into office, there are only 50 million doses available,” he said.

“I mean figuratively, or literally, nothing was in the refrigerator,” Biden said of vaccine availability when he took office.

However, progress against the virus is threatened by several new variants, experts say. Face masks and social distancing measures are still urgently needed. 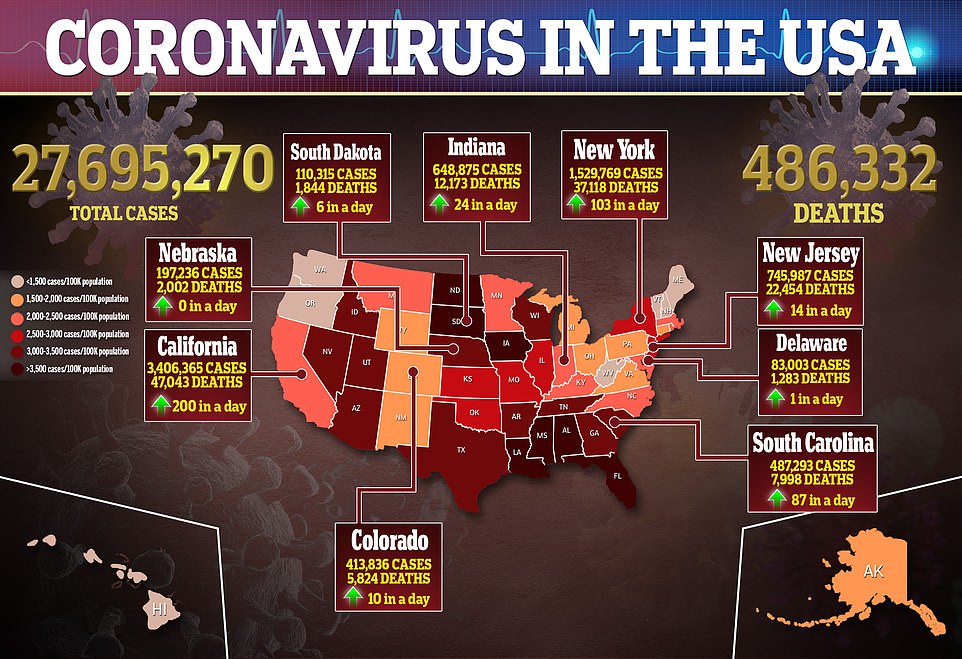 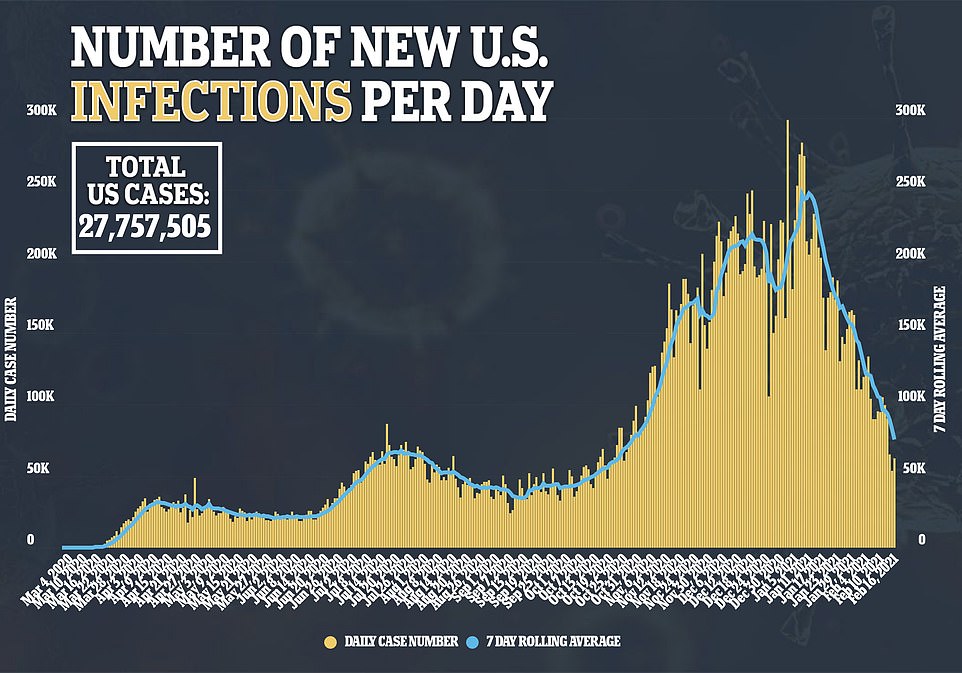 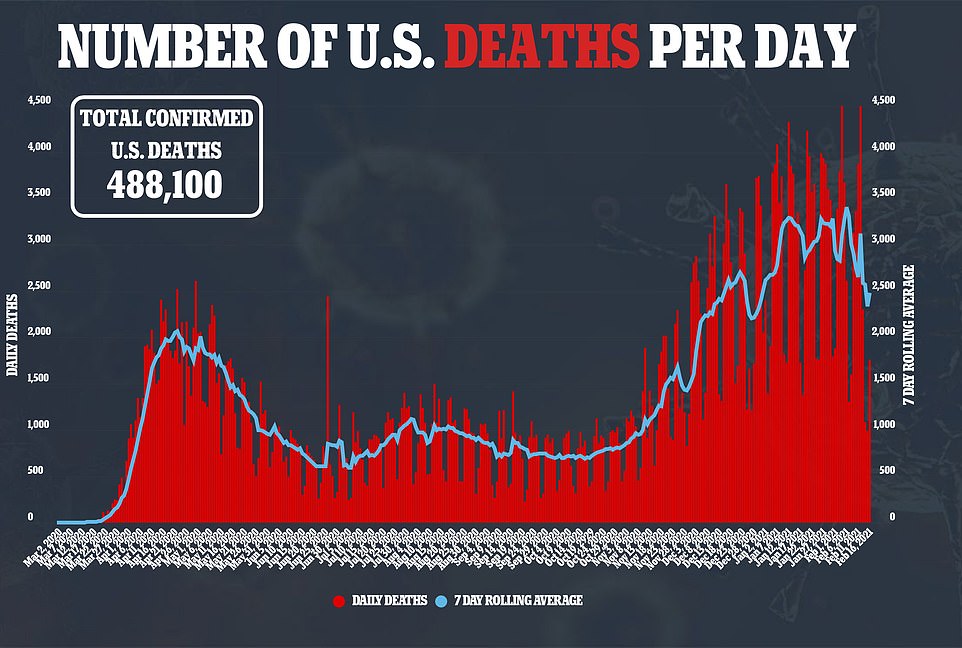 Olympics 2020: Japan declare state of emergency in Tokyo with less than 200 days to go