More than 75 percent of coronavirus patients have at least one symptom six months after their illness, according to a new study.

The researchers found that the most common symptom in coronavirus patients was fatigue and muscle weakness, which was reported in at least two-thirds of patients.

In addition, of around 400 patients who were tested for lung function, more than half who had to be ventilated had severe values ​​six months later – which could indicate permanent organ damage.

In addition, antibody levels tested in 100 patients decreased by more than half during the follow-up, which raises questions about the potential of reinfection, according to the team at Jin Yin-tan Hospital of Wuhan Research Center for the Diagnosis and Treatment of Communicable Diseases in China. 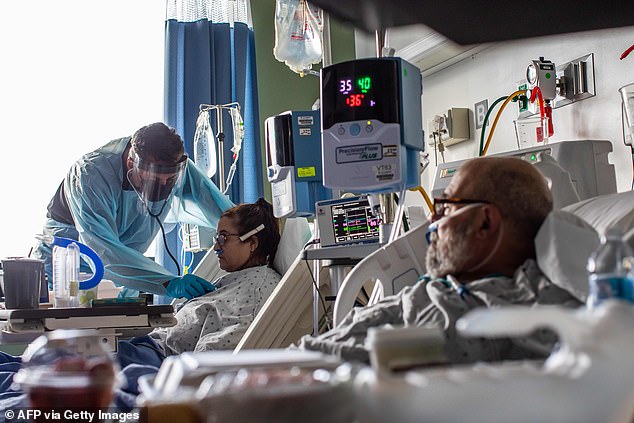 A new study from the Jin Yin-tan Hospital in China found that more than 75% of patients reported at least one symptom six months later, with 63% being the most common being fatigue and muscle weakness. Pictured: Dr. Thomas Yadegar checks Mindy Cross’s vital signs while her husband, Dr. Neil Hecht (right) rests in a bed next to her at the Providence Cedars-Sinai Tarzana Medical Center in Tarzana, California, in January 2021